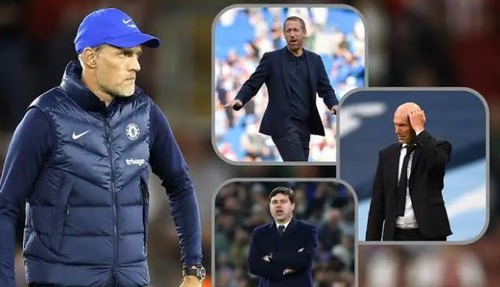 Chelsea have started the season poorly after two defeats in the Premier League against both Leeds United and Southampton. A well experienced manager, Tuchel however didn’t correct the big mistakes. His team committed in the domestic level when they had to encounter Dinamo Zagreb last night.

The blues took a short trip to Croatia for the Champions League stage first fixture against Dinamo Zagreb. Unfortunately for the blues they lost in 1-0 scoreline which had consequences to the manager, Tuchel.

According to SunSport report the West London side under new ownership of Todd Boehly consortium has decided to part with Tuchel as of today. The manager has been sacked despite the fact that he had the club win Champions League trophy two seasons ago. Meanwhile we take a look into who is the best manager Todd as well as his team may consider in replacing Tuchel. Firstly we as well consider two high profile managers who are available in the market which includes Pochettino and Zinedine Zidane. Other target could be current Brighton boss, Graham Potter and the likes of Jose Mourinho at Roma. However Pochettino in this case has much needed experience in the Premier League. After leading Tottenham Hotspur to Champions League final back in 2020 but lost to Liverpool under Klopp.

Secondly, Zinedine has won the Champions League trophy three times with Real Madrid which is a huge boost to Chelsea side. A major concern for the Todd Boehly on Zinedine will be the boss has no Premier League experience. Having managed Real Madrid in Laliga is a different League to a tough Premier League campaign. Having Zinedine Zidane with less managerial experience since leaving Los Blancos he hasn’t taken any big job. To at least test his abilities in another league could be another big risk for the Chelsea side to appoint him as new manager. Lastly, will be former manager Jose Mourinho who knows blues better after being their gaffer previously under Abramovich who was the club owner. But having taken the Roma job could be a tricky time for Chelsea to pay Italians to get Jose Mourinho.

Goodbye: Not too good news at Stamford Bridge, as Chelsea owner, sacked Thomas Tuchel due to poor performances

So is Graham Potter at Brighton may seem like the better option as the latter has Premier League experience. But there is the big chance Brighton to deny him any exit at this time. As well as the manager may not be having the ability. To manage big stars at the club like Aubameyang, Koulibaly, Jorginho, Kai and Raheem who may have ego for various reasons.