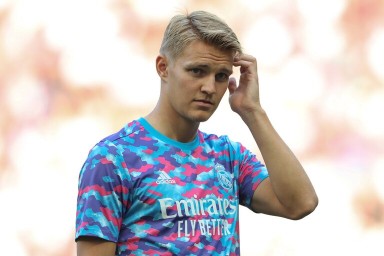 According to the report, Arsenal fully set to signed Martin Odegaard after the £42million bid agreed with this summer, as Real Madrid placed the Norwegian players, on their transfer list.

Meanwhile, Odegaard spent the second half of last season on loan at Arsenal, having failed to establish a role at Real Madrid under Zinedine Zidane.

Perez to set to loan Odegaard on a new deal at any price as Real Madrid wants to build a youthful future.

But Carlo Ancelotti prefers the likes of Isco to Odegaard as he feels the Spaniard is more prepared. So, Real Madrid is willing to sell the latter for the right price, but are currently unconvinced by Arsenal’s offer.

Mikel Arteta is desperate to see Odegaard return to north London after his half-season spell on loan at the club. Mundo Deportivo reports the Spaniard has once again urged the Gunners to secure his transfer, as he seeks more creativity.

Arsenal already have a contract ready for Odegaard to sign if he returns permanently from Real Madrid, as well. Defensa Central reported last month the Gunners would pay him £114k per week, £73k-£81k per week wage.