Babajide Finally Predicts The Winner of The Forthcoming Info Election 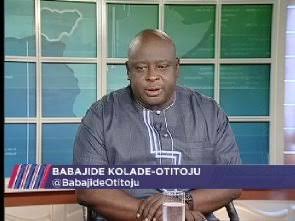 Babajide Kolade Otitoju a veteran journalist, while lending his voice on the Thursday edition of the popular program “Journalist Hangout” on TVC news October 8, finally predicts that Governor Rotimi Akeredolu will win the Ondo Governorship election coming on Saturday October 10.

Babajide while analyzing his prediction said “I project Akeredolu will win eleven (11) local government areaswhich are, Akoko north East, North west, Akoko south west, ile Oluji, Irele, odigbo, ose, idanre, oke igbo, Ilaje and Owo. I am not afraid to predict again, because of my prediction that went south during the Edo election.

For my own political calculation, the Governor has dropped his ego, and went back to people he used to fight with. For example, olusola oke is a major factor in the politics of Ondo state, now he is on good terms with the Governor. Also, people like Ajayi boroffice, Kekemeke, Olusegun Abraham.

I believe there are so many things working for him now, especially because of all these political actors, who are very strong in their zones not even local government these time around.

Again, I predict that Governor Akeredolu will win the forthcoming governorship election in Ondo state, because he many things working for him now.