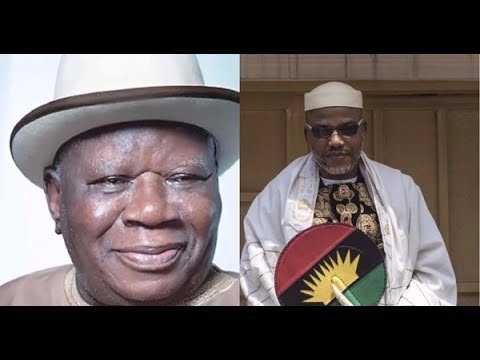 Mazi Nnamdi Kanu, The Indigenous People of Biafra, IPOB, leader, has once again come out to say that Edwin Clark was kept alive because God wants to humiliate him based on his portrayal of the Biafra people.

In an exclusive Facebook interactive forum where he made this public with a very sound voice that Edwin flack happens to be one of the most wicked individuals and a betrayal of the highest order of the Biafra agitation during the 1967 to 70 civil war which claimed the lives of many different and rendered almost useless but Elohim above never allow that to continue to happen because the Biafra descendants are From above and I blessed completely with every good thing.

Mazi Nnamdi Kanu stated that right now you can see that Edwin Clark is beginning to work the Fulani people that he was an informant to during the time of the genocide committed on the beer from people and right now we can no longer have such threat is living in our miss but God kept him alive so that he would witness the evils he committed against innocent individuals who are only agitating for their freedom and rights for the people they all belong to.

Edwin Clark let it be known to you that God in heaven is angry with you and I believe that in no time you will die but not a peaceful one I promise you.