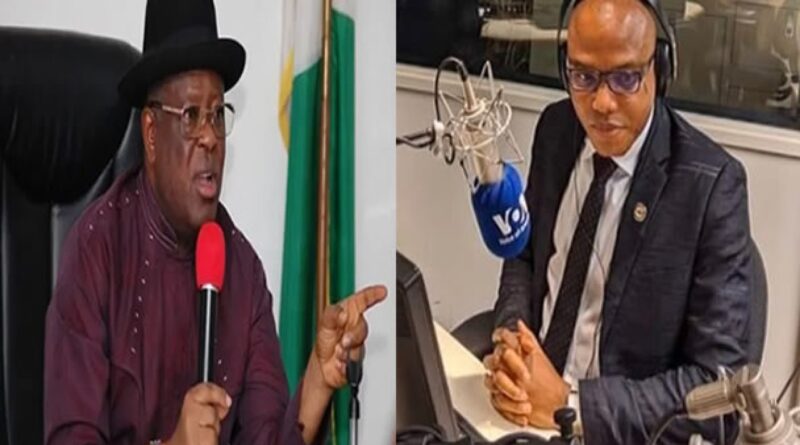 The Indigenous People of Biafra, IPOB, groups, has once again blasted the Ebonyi governors in the South-East, especially, Gov. Umahi, over underrating the astern Security outfit, recently established by the pro-Biafran group, to protect life and property in the region.

Although, Governor Dave Umahi, had insisted that the South-East region remains the safest region in entire Nigeria, and does not need Nnamdi Kanu-launching a security outfit in the South-East.

Umahi who stated this while briefing journalists in his office in Abakaliki last Friday urged the people to disregard the purported security outfit conceptualized by IPOB, noting that the governors and leaders of the region were doing everything within their powers to protect the lives and property of the citizens and that of those from other regions living in the area.

“Our region remains the safest and nobody can controvert this.

“And so, our brother said he has formed a security outfit for the southeast. It is very laughable and should be totally ignored.

“It is only in the Southeast that the leaders are being castigated openly.

“It is the duty of the Governors to protect the lives of the citizens and also the citizens of other regions living in their states that are not from Southeast.

“I want them to ignore the side distractions,” Umahi had said.

Meanwhile, IPOB, on Sunday, described the governors of the area as cowards with shameful actions targeted at pleasing powers that be.

“We condemn in very strong terms, the recent shameful statement credited to Gov. Dave Umahi on behalf of his fellow Lilly-livered and coward governors of southeast against the newly established Eastern Security Network.

“Such a cowardly statement is nothing but a shameful display of their irredeemable enslavement and loyalty to their caliphate slavemasters who in the first place appointed them Governors.

“They only further exposed their emptiness and detachment from the people.

“At a time when well-meaning individuals and groups from entire Southern Nigeria and Middle Belt are hailing the setting up of ESN, the so-called governors are busy advertising their opposition to the people they claim to be leading.

“Anyway, they never had the mandate of the people. So, we are not surprised.

“But our message to the treacherous South-East governors and their South-South counterparts is that ‘the train has since left the station’ and can’t reverse its cause.

”It’s pretty too late to have a rethink.

“The people have got what they long desired which the cowardly governors failed to give them because of selfish political interest.

“May we remind the traitors that the Eastern region cannot be sacrificed at the altar of their political interest. It’s either they key in or shape out.

“The East can exist without them.

“They should steer clear because they can’t withstand the force behind ESN.

“We reiterate that ESN is not a Biafra army but a vigilante group established to protect Biafrans against terrorists.

“The outfit is only a child of necessity born to bridge the gap of leadership failure by both states and the federal government to protect lives and property of Biafrans who are daily dehumanized, raped and killed by Fulani herdsmen and terrorists unchallenged by any security agency.

“ESN is beyond IPOB.

“It’s the people’s irreversible resolve to defend themselves against conquest and occupation by aliens who enjoy the protection of the Fulani controlled the federal government and security agents.

“Anyone trying to oppose the security outfit is testing the will of the people, and does so at his own peril.”