Biafra: IPOB is not a threats, Presidency stop all this childish act

On 23rd of August 2020, a contingent of the DSS allegedly attacked a Jewish meeting or prayer of a group of people seeking the sovereign state of Biafra. A school in Emene community Enugu state was the venue of indigenous people of Biafra (Ipob) meeting or training as posited by the Nigeria armed forces.

The confrontation led to the Death of 2 officers and many members of Ipob. This is not the first time the military, police should or DSS will be launching an aggressive attack against groups in the south East and south south region. Operation crocodile smile where many Easterners were manhandled arrested all in the name of looking for militants is still fresh in the air albeit the Obasanjo era where a community was nearly wiped out by the Nigeria Army in Bayelsa.

Just this morning, a terrible news broke from Kaduna, suspected Fulani herdsmen raided a village and burnt down a Baptist church and also proceeded to a secondary school named lucky Academy and abducted undisclosed number of students preparing for their junior waec exams. This is one of the very many attacks which has been going on in southern Kaduna leaving Death and Destruction in it’s trail. Victims of the recent attack in southern Kaduna claimed that the Army withdrew in pursuit of the criminals and left the villagers to their fate. This is not the first time the Nigeria Army will be fleeing when they come in contact with Bandits, herdsmen and needles to say Boko haram who has been responsible for thousands of Deaths in the Northern region of the country. The chibok and Dapchi attacks had it that the soldiers fled when the insurgents were approaching the towns. This is the turning point, the question is, why the is the military always found wanting when facing armed carrying and more deadly sects but will suddenly become hyper active when they are being sent to harass innocent gatherings groups who have not being confirmed that they carry arms and ammunitions.

Even though Ipob was outlawed by the Buhari administration, one continues to wonder the pampering of Fulani herdsmen and the recent integration of Boko haram members into the society. In Kaduna, Governor El rufai confirmed that he paid armed carrying groups huge amount of money and yet the killings kept going on unabated. Anyways the Muslim Fulani’s in the state has written that southern Kaduna belonged to them and the occupiers should be ready to either be overrun or leave. The NBA did well by withdrawing the invitation of El rufai to speak at her congress over the improper handling of the situation in Kaduna. It is a crime to be a Christian in kaduna!

The south east youths are being maltreated in their own land under the disguise of belonging to Ipob while their more aggressive counterparts in the North are being paid to maintain peace, q big double standard from the Presidency and the Nigeria armed forces.

The president needs to understand that he is not the president of Fulani and the North alone, he should act like the father of the Nation that he is. You can’t continue to launch unprovoked attacks on a pretext to occupy a particular peaceful region while allowing armed groups a free role in perpetrating crimes up North. 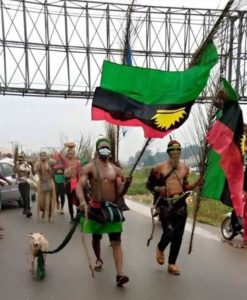 The recent coup in Mali, aggressive protest in Belarus and the recent forced resignation of Lebanon prime minister. The south east should not be pushed to their breaking points to the extent of them getting weapons to defend themselves. The Nigeria Army, DSS and the police should relocate their firepower to the North to protect the vulnerable people dying in their hundreds daily.

The presidency should stop occupying the East and move its Arsenal to the north which is the real theater of war.