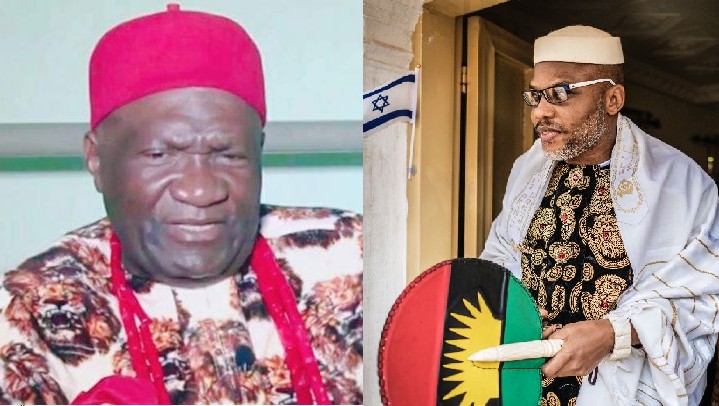 The Ohanaeze Youths on Tuesday, gave the leader of the Indigenous People of Biafra(IPOB), Prince Mazi Nnamdi Kanu, seven days to tender his unreserved apology to the president-general of Ohanaeze Ndigbo, Chief John Nnia Nwodo Jnr.

According to the Youths leader, This followed Mazi Kanu’s disrespectful utterances on Chief Nwodo’s person, including his call for the stoning of Nwodo to death. The group gave the order when they paid a solidarity visit to Chief Nwodo at the Ohanaeze secretariat in Enugu.

The president of the Enugu State wing of Ohanaeze Youths, Mr. Wencelus Ogbonna, while extolling the leadership qualities of Chief Nwodo, and particularly his numerous sacrifices for the good of Igboland, vowed on behalf of other activists to make Mazi Kanu face the full wrath of the law should he fail to apologize to the PG.

“Nnamdi Kanu is a confusion who derives joy from crises. We commend the president-general of Ohanaeze world-wide for his stand on restructuring Nigeria, which has been embraced by other parts of the country.”

Chief Nwodo thanked the Igbo youths for their solidarity, stressing that his commitment to the Igbo cause would in no way be vitiated.

He added that Mazi Nnamdi Kanu and his cohorts remained his children, and called on the Igbo to close ranks and avoid bitterness and rancor.