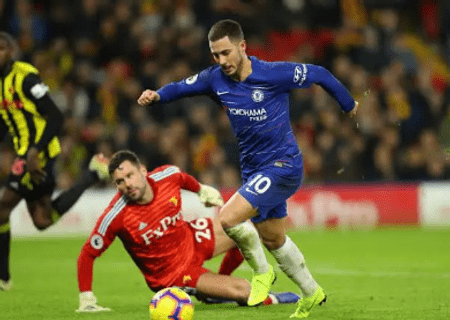 Chelsea thrashed Aston Villa on Boxing Day as they return to winning ways after drawing their last two Premier League matches against Everton and Wolves respectively.

However, Chelsea has also lost their last two Boxing Day fixtures against Bournemouth and Arsenal respectively, so they would be looking to win this year’s edition of the fixture.

Following his arrival at Chelsea in 2012, the Blues won 6 of their 7 games on Boxing Day with Hazard as their player, drawing only one against Watford, with the Belgian winger coming on as a late substitute on the day after just returning from injury.

The Belgian tricky winger was always on top of his game on Boxing Day games for Chelsea, scoring some important goals and for the Blues in many of those fixtures, including his only goal as Chelsea defeated Swansea 1-0 in 2013, and his brace in their 2-1 victory against Watford in 2018.

Below are Chelsea’s results on Boxing Days with Eden Hazard as their player since 2012.

The 2018’s edition was Hazard’s last Boxing Day game for Chelsea, and he marked the occasion with a brace.

But following his departure in 2019 Chelsea have lost all 2 previous Boxing Day games against Bournemouth and Arsenal.