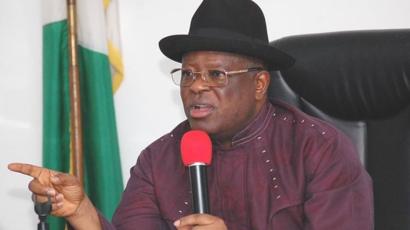 The Executive Governor of Ebonyi State, David Umahi has ordered the total shutdown of all government offices in the state with immediate effect to control further spread of the virus.

He said the order became imperative followed by the contraction of COVID-19 by some Executive Council members.

Umahi gave the directive in a statement by the Commissioner for Information and State Orientation, Orji Uchenna Orji.

He expressed concerns over the increasing cases of coronavirus in the state, which stands at 75 out of the over 3,000 sample tests conducted.

Although he did not give the names of the cabinet members who tested positive to the virus, the Governor described the situation as disturbing.

He noted the positive cabinet members are receiving treatment and all in stable conditions.

The government offices, he directed, will be shut from Thursday, June 4- Wednesday, June 10 to allow for decontamination.

“All civil servants shall work from their respective homes within this period but shall leave their phones open to respond to official imperatives.

“All Exco members and Government officials especially of the Ministries of Finance and Budget are advised to undergo COVID-19 test within this seven days period.

“The Governor further advises that during this period of the closedown of Government offices, all workers especially from the two Ministries aforementioned should go into self-isolation.

“All site operations shall however remain open, but must be in strict observance of COVID-19 protocol.”