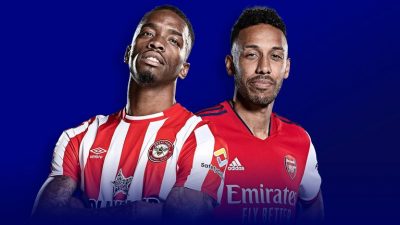 Brentford starting on their first time in the Premier League shows set to make a difference in the 2021/2022 season, with a good performance in today’s match.

Although, The Gunners were without both Pierre-Emerick Aubameyang and Alexandra Lacazette due to illness, handing Folarin Balogun his Premier League debut.

Balogun wasted the visitors’ best chance of the first half but was also unfortunate not to win a penalty as he was caught on the follow-through after slicing wide.

Bukayo Saka was given a standing ovation by both sets of fans when he was introduced on the hour mark after the racial abuse he suffered in the aftermath of missing the decisive penalty in England’s Euro 2020 final defeat to Italy. (Arsenal)

But Brentford’s players were in no mood to show any mercy and substitute Norgaard made sure of a famous night 17 minutes from time. Arsenal somehow let a long throw bounce inside their six-yard box and the Danish international gratefully headed into an unguarded net to double Brentford’s advantage.

Norgaard was inches away from another goal moments later with Leno again flapping at a set-piece.

Smith-Rowe and Tierney were the only sources of comfort for Arsenal as they combined to set up Nicolas Pepe, who was denied by a stunning save by Raya five minutes from time.

After finishing eighth in each of his first two seasons in charge, Mikel Arteta was under pressure before the season even began to show signs of a major improvement.

The Spaniard has a daunting task to turn things around before the September international break with title favorites Chelsea and Manchester City to come in Arsenal’s next two games.