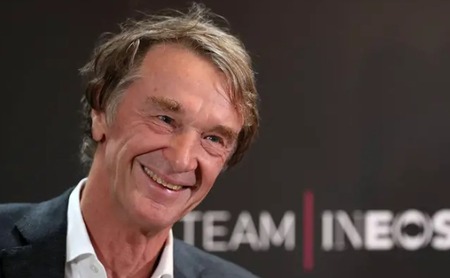 Is it because of Cristiano Ronaldo or Erik Ten Hag that the owners of Manchester United wanted sell the club or what? Although, Britain’s richest man Sir Jim Ratcliffe will reportedly launch a bid to takeover Manchester United after the Glazer family put the Premier League giants up for sale.

Ratcliffe previously attempted to buy the club over the summer, but ultimately pulled out after it became clear the Glazers were not willing to sell. The owner of petrochemicals giant Ineos, he is considered to be one of the richest men in the world.

However, things have now changed and it emerged on Tuesday evening that The Glazers are ready to consider offers for the Old Trafford club.

That stance has led to Ratcliffe once again entering the frame, having missed out on Chelsea last season.

The Daily Telegraph reports Ratcliffe will now launch a fresh bid to buy the Red Devils, but is said to be wary of the £5billion asking price that has been slapped on the club.

United are using The Raine Group to help find any new investment, a company Ratcliffe is well versed in using after they also advised Chelsea on their sale.

Ratcliffe’s biggest concern, however, is that the Glazers may look for a price that is ‘far beyond’ United’s actual value.

Ratcliffe failed in his bid for Chelsea as he was too late to the party hoping the price would drop. The Blues were ultimately sold for around £2.5bn to Todd Boehly.

Ineos owner Ratcliffe has a particular interest in United having supported them since he was a child.

His interest in the club is said to be ‘serious’ and he is the first major suitor to have a bid declared.

“Might I run it differently? Or might I run it? I think the answer about performance of Manchester United is a simple one. The biggest correlation of success in football is money. Without question,” Ratcliffe told a Financial Times event.

“It’s not the only one because you have outliers like Brighton. But the biggest one by far is – if you’ve got the highest revenues you can afford the best players, you play the best football. Manchester United is one of those. It was one of those top three clubs.

“The two in Spain, Madrid and Barca, then Manchester United. They all earned revenues of about £800m. A few more have joined that club now, of course. You’ve got Bayern Munich, you’ve got PSG. You’ve got, I can hardly say it, Manchester City. And Liverpool.

“But Manchester United are not playing in that league of those other teams, at the moment. And they haven’t done really since Sir Alex stepped down. So something is not… they are not firing on all cylinders. That would be my point on performance.”

No doubt,  it seems that there is another key issue on the horizon in that Ineos already owns Ligue 1 side Nice. But, UEFA rules state the two clubs would not be allowed to play each other competitively, it Ratcliffe took ownership of United.

However, Bidders has started emerging immediately the owners of United’s share price increased again on Wednesday and it’s rumoured that some of the parties who mounted unsuccessful Chelsea offers could join the race to buy