CHE 1-RMA 3: What are Chelsea chances to qualify for Semi-final after losing yesterday’s match against Real Madrid 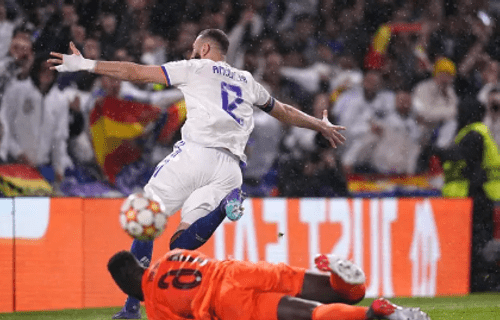 Thomas Tuchel’s Chelsea suffered yet another humiliating defeat at the Stamford Bridge Stadium for the second time in five (5) days. Karim Benzema’s hat-trick goal secured the first-ever away victory for Carlo Ancelotti’s Real Madrid at the Bridge yesterday.

Chelsea started the UEFA Champions League quarter-finals first leg fixture by pressing hard on Real Madrid’s defenders but didn’t get what they wanted as the Los Blancos team was able to absorb the pressure and utilized the counterattack over Chelsea.

The blues will need to mount pressure on the Los Blancos team when they travel to Madrid for their second leg fixture. With the advantage on Carlo Ancelotti’s Real Madrid side, it might be hard for Chelsea to secure a comeback win in the tie as they would be playing in front of the Santiago Bernabeu fans.

Going by the records in the UEFA Champions League, only one team has ever overturned a two-goal Champions League deficit when the second leg was away from home. Manchester United did so against Paris Saint-Germain in the knockout stages and Chelsea could be the second if they defeat Carlo Ancelotti’s Real Madrid by 4 goals to 1.

Chelsea’s ball possession and several shots made yesterday were way better than Carlo Ancelotti’s Real Madrid but luck was against them as they suffered yet another humiliation at the bridge in the UEFA Champions League.

Thomas Tuchel’s Chelsea will need to score and not concede another goal at the Santiago Bernabeu Stadium when they return for the second leg fixture. A 3-0 scoreline against Real Madrid will be enough to send the defending Champions to the semi-finals of this year’s UEFA Champions League at the expense of the Los Blancos team.

Since the UEFA away goal rule is no longer used Chelsea still has a chance to qualify for the next round if only they can stop Karim Benzema from scoring again. Carlo Ancelotti’s Real Madrid have recently been defeated by a four goals margin at the Santiago Bernabeu Stadium this season and Chelsea could repeat the same results if they throw everything they have against the Spanish Laliga giant.