CHE 2 vs PLY 1: Kepa save late penalty for Chelsea for deny Plymouth 2 goals(Photo) 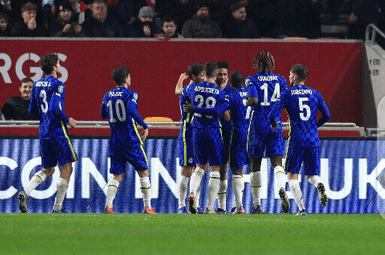 In the bright, West London weekend sun, the 6,000 travelling Plymouth fans were treated to an early goal when Macaulay Gillesphey evaded Romelu Lukaku’s marking to head the League One side in front.

The goal came only eight minutes into a game that the hosts had begun to dominate, and Mateo Kovacic hit the crossbar only moments later. Plymouth took heart from the goal and yet it did not take long for Chelsea to assert themselves, Callum Hudson-Odoi heading onto the bar before Kovacic again hit the woodwork with a rasping drive.

Cesar Azpilicueta levelled the scores after 40 minutes, darting into the box to meet a low cross with a smart backheel. Chelsea, without manager Thomas Tuchel, maintained the pressure in the second-half but struggled to make Michael Cooper work in the Plymouth goal. A low cross from Hakim Ziyech presented Lukaku with a gaping goal, but the Belgian was a yard behind the cross. 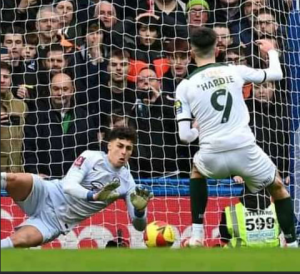 Substitute Ryan Hardie had a rare glimpse of goal before Mason Mount forced Cooper into a great reflex stop. The heroic defending was more than enough to deserve another 30 minutes to decide the tie. Chelsea made the breakthrough in stoppage time of the first period, Marcos Alonso getting on the end of a sweet move to keep the Blues in the competition with a hefty dose of relief to boot.

And yet there was still time for more drama after Malang Sarr gave the ball away and bundled over Ryan Hardie in the box, earning Plymouth a 117th-minute penalty. The striker took it himself, and saw a weak effort saved by Kepa Arrizabalaga.