According to report, Chelsea’a Boss, Thomas Tuchel’s squad will be looking to keep the pressure on league leaders Manchester City and Liverpool, When they play Brighton on Wednesday.

The Blues returned to winning ways on Sunday, defeating Aston Villa 3-1 thanks to Jorginho and Lukaku and they would be aiming to keep it that way when they face Brighton tomorrow.

The Blues are now six points behind Manchester City, and if they want to close the gap, they must continue to win their remaining games while hoping Manchester City loses points. Meanwhile here are three players Chelsea could be without for their game on Wednesday; 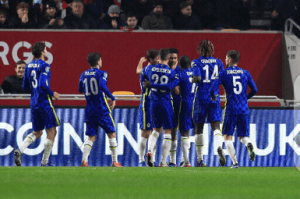 The left wing-back has been out with a knee injury since suffering it against Juventus in the Champions League last month. According to Tuchel, he is expected to return next year.

Kante was substituted off for Mateo Kovacic in the 63rd minute of Sunday’s win over Aston Villa, in what appeared to be a tactical move at the time but was later revealed to be an injury. Tuchel revealed that the France midfielder complained of pains in the same area where he was injured against Juventus last month. The Chelsea midfielder could be rested on Wednesday to avoid further complications.

Silva suffered a hamstring injury in Sunday’s win over Aston Villa and will most likely miss the game on Wednesday. Tuchel stated, and I quote:

“With Thiago it was his hamstring. Hopefully he got out before it became an injury and from there we try to continue and find a new squad and strong squad on Wednesday.”