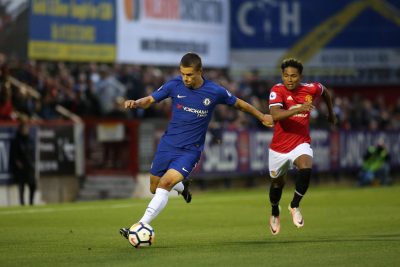 Chelsea remains top of the table with 29 points from their opening 12 games, whereas Michael Carrick’s side sits in eightmh place and 12 points below the European champions.

Chelsea left-back Ben Chilwell misses out having sustained a knee ligament injury against Juventus in midweek.

However, striker Romelu Lukaku could return to the squad after injury. Havertz is also available for selection.

Mendy gets the start. 3 man defense of Rudiger, Thiago Silva, and Chalobah. Alonso replaces Chilwell at the left wing-back, while Reece James starts at the other flank.

Ruben Loftus-Cheek assumes a big role in the midfield area, he will play alongside Jorginho. Both players will look to build on stronger understanding when they partner together at the midfield area.

Odoi and Mason Mount could start at both flanks which leave Timo Werner at the Center forward position.

Man United will be without Harry Maguire this weekend. The Manchester United skipper is banned after his sending-off at Watford last weekend and Luke Shaw may also be absent again with a head injury. And both Fred and Edinson Cavani are doubts, while Raphael Varane and Paul Pogba are still injured.

Eric Bailey, Lindelof, Telles, and Wan Bissaka are expected to start at Man United’s defense, with De Gea at the goal line.

Bruno Fernandes, McTominay, and Van De Beek will partner in the midfield.

Marcus Rashford, Cristiano Ronaldo, and Jaden Sancho may lead United’s attack once again this weekend with hopes to get back to winning ways against League leaders Chelsea.