CHE vs NEW: How Could Chelsea Lineup With Kante, Silva, Havertz, Ziyech, Mount, and Werner Today 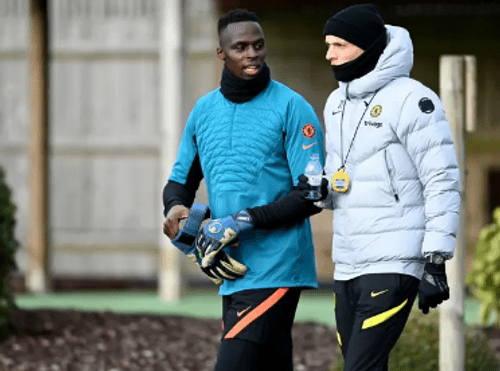 Chelsea will be clashing against Newcastle at Stamford Bridge today (3pm), as regards the continuation of their Premier League fixtures for the 2021-2022 campaign. Without being sentimental, the Thomas Tuchel’s men are expected to continue their winning streak in the league, even though there’s a lot going on at the club currently.

Meanwhile, there’s a particular way Chelsea could lineup against Newcastle today, with the likes of Hakim Ziyech, N’Golo Kante, Thiago Silva, Kai Havertz, Timo Werner, and Mason Mount. In all fairness, the Magpies have been unbeaten since they reinforced their squad in January. However, the formation below is enough to end their unbeaten run, particularly with the aforementioned players in the starting XI.

Edouard Mendy will continue from the goalpost, as he remains the Blues’ No.1 goalstopper. Potentially, the Senegalese has the ability to deny Newcastle, so Chelsea can count on him at Stamford Bridge this afternoon.

Since César Azpilicueta, Marcos Alonso, and Reece James are unavailable today, Thomas Tuchel is expected to switch to the formation of 4-2-2-2. As a result of that, Thiago Silva and Antonio Rüdiger will play as centre-backs, while Malang Sarr will be a left-back and Andreas Christensen as a right-back. Defensively, this particular 4-man setup is enough to subdue the Magpies today.

Mateo Kovacic is most likely to rest ahead of Lille’s clash next week, so Jorginho and N’Golo Kante will play as double defensive, box-to-box and deep-lying midfielders. Of course, the Italian magnifico will play to command the midfield, while the Frenchman will move the ball forward, so as to create chances and attack the opponent’s box. Apparently, the Jorginho-Kante combination always works wonders for Chelsea.

As regards the formation of 4-2-2-2, Mason Mount and Hakim Ziyech will play as wide attackers today, because they are creative enough to lay passes to break the Newcastle defensive setup. So, Ziyech will attack widely from the left-wing, while Mount will attack from the right-wing. The Moroccan wizard always plays amazingly well with a 4-man defensive setup, which means he’s expected to single-handedly dumbfound the Magpies today.

Timo Werner and Kai Havertz connected brilliantly against Burnley on Thursday, as they are expected to start together today. As a result, the two Germans will play as double strikers, since they know how to play alongside each other. With this formation, Werner will use his running skills to beat the defenders, whilst Havertz positions himself to score goals, having seen his display against the Clarets on Thursday.