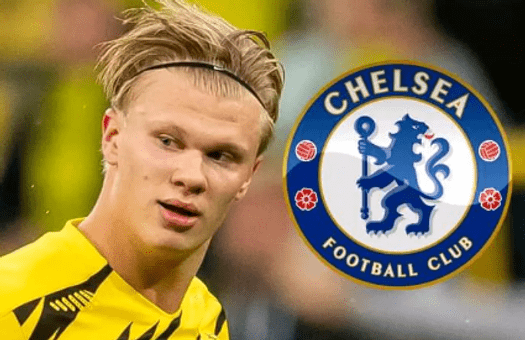 With months left before the current season comes to an end, Chelsea fans will be hoping that the club signs new players, to enable the Blues rival Liverpool and Manchester City for the Premier League title next season.

So far, Chelsea are third in the Premier League table, with a Carabao Cup final to play against Liverpool on Sunday, but the 2021-22 season has been filled with ups and downs for Chelsea.

In the summer of 2021, Chelsea did everything possible to sign Norway international Erling Braut Haaland from Borussia Dortmund, but the German outfits were reluctant to sale, forcing Chelsea to spend £97.5m for Romelu Lukaku.
Romelu Lukaku currently is having a hard time adopting to Thomas Tuchel system at Chelsea, leaving the Belgium international with 5 goals in 27 Premier League appearance. Young, exciting, creative and productive, Erling Braut Haaland has establish himself as one of Europes most lethal front man.

The 21-year-old will definitely be the top target for Europe’s biggest clubs in the summer transfer window, but there is still a chance that he could still join Chelsea.

Roman Abramovich desire to bring in quality players for Chelsea confirms that, and Thomas Tuchel who is known for big name signings, has already identified Erling Braut Haaland as his primary target in the upcoming summer. Erling Braut Haaland’s release clause will be activated in the summer, so the likes of Chelsea, Bayern, Manchester City and Real Madrid wil definitely compete to sign the Norway international. With the likes of Antonio Rudiger, Cesar Azpilicueta and Andreas Christensen all set to leave Chelsea in the summer, Jules Kounde will be Chelsea’s ideal target in the summer.

Chelsea has been linked with Jules Kounde throughout the January transfer window, but the deal was not finalised, due to Chelsea’s unwillingness to meet Sevilla’s demands.

But this summer, the deal could still happen, as Chelsea hope to rival Manchester City and Liverpool for the Premier League title. The Belgium magician has been linked with a return to the Premier League, after falling at of favour under current head coach Carlo Ancelotti.

Eden Hazard has endured a difficult start to life in Spain, following his switch from Stamford Bridge to Santiago Bernabeu.

Hazard’s current situation at Real Madrid and Chelsea’s lack of wingers indicates that, the Blues could still try to convince Eden Hazard to return to the Premier League.

Fans will be thrilled to see Eden Hazard back at Chelsea. This summer could be the summer Chelsea finally sign Declan Rice from West Ham.

Declan Rice continues to grow from strength to strength, the England international has been outstanding for West Ham this season.

And his impressive display could very well lead him to Chelsea. Thomas Tuchel will be hoping to sign Declan Rice to improve his midfield option before the start of next season. Leicester City’s centre back Wesley Fofana has been linked with a move to Stamford Bridge throughout the winter transfer window, but an agreement was not reached between Leicester City and Chelsea.

But as the likes of Antonio Rudiger and Andreas Christensen both likely to depart Stamford Bridge in the summer, Chelsea will be looking to sign a young, creative, exciting and proven defender to help them challenge for the Premier League title.

GOAL reports has it that, Chelsea has already identified Wesley Fofana as Rudiger’s replacement.