Check out what Chelsea’s fans did, as Edouard Mendy arrived Abu Dhabi to joined teammates 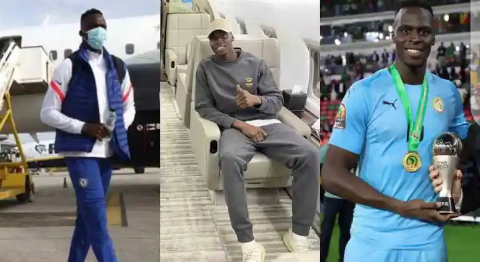 Edouard Mendy, Senegal international and Chelsea goalkeeper has arrived at Abu Dhabi stadium to join his other teammates ahead of the FIFA Club World Cup, CWC, match slated on Wednesday, February 9, 2022 against Al Hilal which will Kick-off at 17:30 BST hrs.

Mendy, whose country won the African Cup of Nations, AFCON22, on Sunday, February 6 2022 is not getting any time to enjoy his triumph as he joined the Blues’s squad for Wednesday clash CWC Semi-final encounter against against Asian Champions League winners, Al Hilal.

Although, Al Hilal who recently trashed Al Jazira 6-1 in the second round of the competition on Sunday with the Nigerian striker, Odion Ighalo who joined the Saudi Arabian Football Club last month.