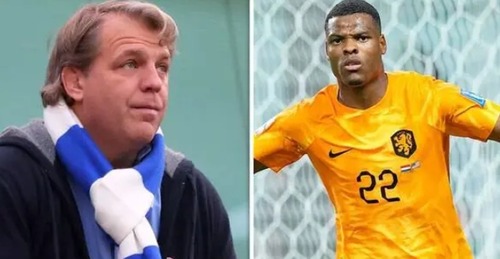 Todd Boehly, the owner of Chelsea, has received some encouragement in his pursuit of Dutch star Denzel Dumfries. This is due to the player’s agent begging Inter Milan not to overpay for a transfer.

Dumfries was linked with a move to Chelsea during the summer transfer window. Tottenham Hotspur and Manchester United are also interested in signing the winger.

Despite a manager change earlier this season, the Blues are still interested in signing the 26-year-old. Dumfries has two and a half years left on his Inter Milan contract.

The Serie A giants will not want to lose him cheaply, having only signed him in the summer of 2021. Dumfries has been a standout for the Netherlands in Qatar for the World Cup.

On Saturday, he was named player of the match in the round of 16 victory over the United States. However, his agent has asked Inter not to raise the asking price too much.

Rafaela Pimenta believes that increasing the price of Dumfries will only reduce his chances of moving. “I hope his value doesn’t rise — otherwise it will be difficult to transfer him,” she told Sky Italia.

That will please people like Boehly. Chelsea will want to pay the least amount possible in order to save money for other goals.

This Chelsea player, according to Joe Cole, “doesn’t suit” the Premier League, which is why

Chelsea is looking for reinforcements after a disappointing start to the season. Graham Potter’s first transfer window in charge of the Blues will take place in January.

Potter may wish to increase his goal threat. So far this season, Chelsea has scored fewer goals than Brighton, Leicester, and Leeds in the Premier League.

Dumfries, on the other hand, would provide solid backup and competition for Reece James, who is expected to return from injury after the World Cup. Dumfries recently stated that he is flattered to be linked to Chelsea but is completely focused on his current situation.

“Of course it’s a compliment,” Dumfries told The Athletic. But wearing the Nerazzurri shirt is also a big compliment.