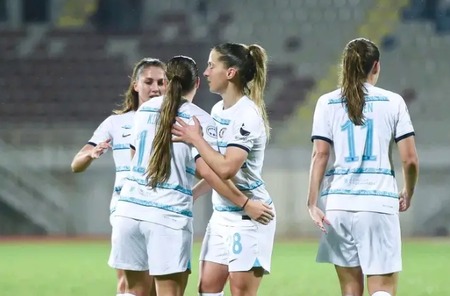 Chelsea Women advanced to the Women’s Champions League quarterfinals with a 4-0 victory over Vllaznia Women in Group A.

After only 12 minutes, Ingle met a deflected cross from Guro Reiten just inside the area and produced a fine side-footed finish into the bottom corner.

The champions of the Women’s Super League scored their second goal on the 20th minute, but the goal was marred by controversy, as Kirby was played through following a quick free kick and finished clinically.

Vllaznia was upset with the decision, but the goal was upheld, and Hayes’ team continued to dominate possession inside the Vllaznia half as the game wound down.

The pressure paid off again in the 87th minute, when substitute Svitkova met Jelena Cankovic’s inswinging ball with a header past goalkeeper Kaylin Williams-Mosier, who had come charging off her line to no avail.

Chelsea scored a fourth goal in stoppage time after Sara Maliqi was adjudged to have handled the ball inside the box, and Mjelde made no mistake from 12 yards out.

If Paris Saint-Germain fail to beat Real Madrid in the 8pm kickoff, Hayes’ team could end the night as Group A winners, but they may have to wait until next week’s meeting with the French side at Kingsmeadow to be certain of first place.