“Chelsea has the best squad, but Graham Potter yet to use them”- Zidane reveal how Chelsea’s squad should be 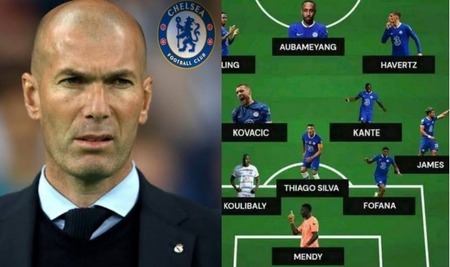 Zinedine Zidane was once reportedly willing to manage Chelsea but has since explained that the language barrier could prevent a move to England. The Real Madrid icon is one of the favourites to replace the sacked Thomas Tuchel at Stamford Bridge.

Chelsea apparently lined up Zidane to replace former boss Maurizio Sarri in February 2019. The Italian was under-pressure having failed to galvanise the squad after the departure of Antonio Conte, and results were poor.

Sarri remained despite strong links with Zidane, who was apparently keen on the job having been out of work since leaving Real Madrid for the first time the previous summer. However, the Frenchman made a set of demands to the Blues hierarchy.

A three-part wishlist to then-owner Roman Abramovich included tying down star forward Eden Hazard to a long-term contract. Zidane also wanted £200million to improve the squad and to have a major say in transfers alongside sporting director Marina Granovskaia, according to The Sun.

EPL: “This is the major reason”- Sterling reveals why Graham Potter better than Thomas Tuchel

Chelsea ultimately moved on with Sarri in charge. He won the Europa League at the end of the campaign before his departure – with Frank Lampard being brought in to bridge the growing distance between the club and its fans.