Chelsea officially announces the signing of French Ligue I Player(Photos) 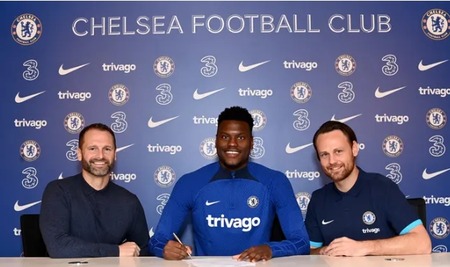 Chelsea has announced the signing of French Ligue 1 star Benoit Badiashile from AS Monaco for an undisclosed fee. The Blues confirmed the France international on Thursday afternoon. Benoit Badiashile signed a seven and half years contract with the Blues and will battle for a place in the starting XI with Thiago Silva, Wesley Fofana, and Koulibaly. Chelsea released an official statement to confirm the signing of Ligue 1 star Benoit Badiashile from Monaco.

“Benoit Badiashile has completed a permanent transfer to Chelsea from AS Monaco, signing a seven-and-a-half-year contract at Stamford Bridge,” the club confirmed.

“The central defender has been a regular in Ligue 1 for the past five seasons and recently made his senior debut for France, having represented Les Bleus all the way up from Under-16 level. “Despite the fact he only turns 22 in March, Badiashile already boasts significant experience in the French top flight and in Europe, where he has featured in the Champions League and Europa League for Monaco, amassing almost 150 appearances in all competitions to date.