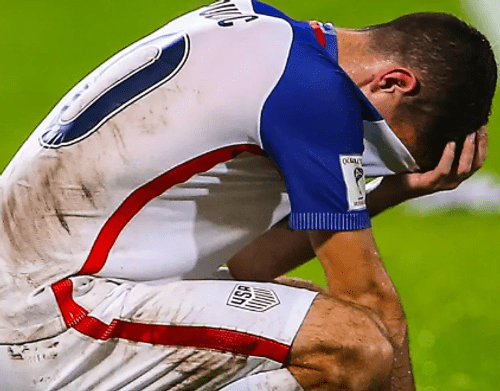 Chelsea football club of England star Christian Pulisic was in tears after he helped the United States of America national team to secure 2022 FIFA World Cup ticket on Thursday morning.

The former Borussia Dortmund football club star has been superb for his national team for the past few years, and he was able to impress again in his team’s last game of the qualifications.
United States of America national team head coach gave the Chelsea Academy product a captain hand band, and he was able to impress in the game, despite the fact that they suffered a shock defeat, but that doesn’t stop them from booking their spot in the 2022 FIFA World Cup. Christian Pulisic tried to give the home team the lead in the early minutes of the game, but his effort was saved by impressive Paris Saint Germain football club goalkeeper Kaylor Navas, as the first half ended goalless.

Juan Pablo Vargas opened the scoring chart for the home team in the 51th minutes, before Anthony Contreras doubled the lead in the 59th minutes to end the match 2-0. United States of America national team failed to qualify for the 2018 FIFA World Cup in Russia, but Christian Pulisic was fantastic during 2022 World Cup qualifiers, and he was able to score a hat-trick in their last game which gave them the advantage of booking their spot in the World Cup.

Pulisic was seen crying uncontrollably after the end of the game, and his teammates were able to celebrate the qualification with him. Congratulations to Christian Pulisic and United States of America national team for securing their spot in this year’s edition of FIFA World Cup.