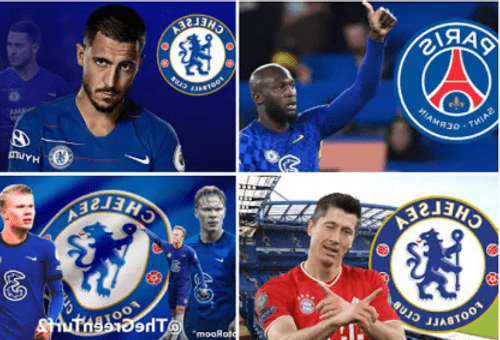 No doubt, Chelsea played a 1-1 draw with Brighton in yesterday game in the ongoing English Premier League, EPL, as Callum Hudsron-Odoi was blame for the poor performances of the Blues in yesterday’s match against it’s opponents Brighton.

Chelsea have received a transfer offer of around €90 million from Paris Saint-Germain, PSG, for Romelu Lukaku.

As Chelsea could be looking to go for Robert Lewandowski, Erling Haaland, and Eden Hazard if the English club agrees to release the Belgian striker.

Below is a way Chelsea could lineup under the management of Thomas Tuchel with the signings of Erling Haaland from Borussia Dortmund, Robert Lewandowski from Bayern Munich, and Eden Hazard from Real Madrid in the summer transfer window.

With the remaining matches left for Chelsea to play in both EPL,and UEFA Champions League, Can Chelsea still win to maintain it’s position in the Premier League, PL, fixture table or not?