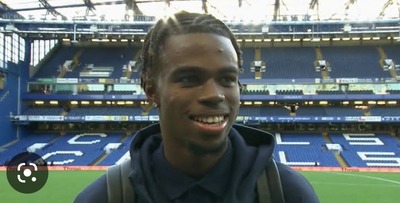 Although he has Nigerian ancestors, playing for the Super Eagles is not on his bucket list.

Chukwuemeka promised to do everything in his power to make the England national team squad for their next major tournament, the 2024 European Championship, in an interview with Chelsea’s 5th Stand application.

Chukwuemeka was born in Austria to Nigerian parents and raised in England, making him qualified to represent all three countries.

The exciting playmaker, on the other hand, has been brought up within the English set-up, having played for the under-17s, under-18s, under-19s, and under-20s.

Chukwuemeka was instrumental in England’s victory at the 2022 UEFA European Under-19 Championship earlier this year. The tournament team included the 19-year-old.

Chukwuemeka’s talent earned him a move to Chelsea from Aston Villa, where he signed a lucrative six-year contract in August.

Nigerian fans’ hopes of seeing the outstanding young midfielder in the green and white of the Super Eagles have been dashed.

The teenager revealed his goals for next year, which include making his England debut and becoming a key player for the Three Lions.

Chelsea has reportedly set its sights on Castello Lukeba

“I want to kick on and break into the team in 2023,” Chukwuemeka said.

“I’m excited to make my Champions League debut. To maintain my self-assurance. To improve on my previous performances.

Carney Chukwuemeka has made three Premier League appearances for Chelsea since joining the club.