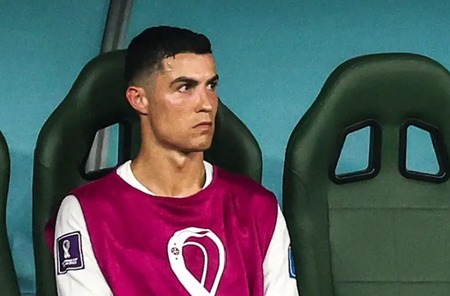 Cristiano Ronaldo replacement Goncal Ramos scored a hat-trick as Portugal humiliated Switzerland 6-1 in their round of 16 knockout clash.Goals from Ramos(3), Pepe, Raphael Guerreiro sealed the victory for the Portuguese side.

In a clip released after Portugal blew away Switzerland at the Lusail Stadium, Portuguese players can be seen applauding on the pitch as they soak up the acclaim of their fans following a sensational display

But apart from his colleagues is Ronaldo, who is slowly making his way across the pitch towards the Portuguese tunnel.

The 37-year-old proceeds to exit the pitch on his own and notably his team-mates neglect to join him as they celebrate jubilantly as a group.

CR7 made his own way to the dressing room a reaction that shows he wasn’t happy with his coach decision.

Portugal had no issues without him in the side as they raced into a 5-1 before he was introduced having started on the bench in a knockout game for his country for the first time since Euro 2008.