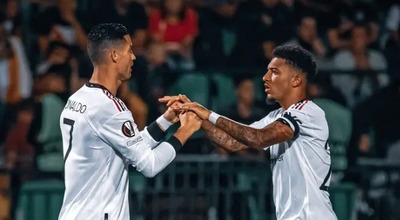 Man United made five changes to the squad that lost to Real Sociedad.Cristiano Ronaldo maintained his position in Manchester United first 11 once again.Jadon Sancho opened the scoring for Man United in the 31st minute after he dribbled past 3 defenders before slotting it to the left bottom corner. In the last minutes of the first half, Cristiano Ronaldo scored for Manchester United through a penalty kick to open his scoring account for this season.

The Red Devils went on to win the match by 2:0.After the match Ronaldo was seen removing his shin guards that he used to play with them in the game against Sherrif. The shin guards that Ronaldo had won for the match had a picture of his whole family in them to show love for his young family of 5 children and his wife Georgina Rodriguez.