What a great performances from Manchester City as the trash Newcastle 4-0, why Chelsea play a goalless draw with Wolves which stick keep the club in their current positions in the EPL table.

Mancheste City will spend Christmas at the top of the Premier League table, thanks to a brilliant performance from Joao Cancelo, who helped the defending champions beat Newcastle on Sunday afternoon.

With the help of some amusing Newcastle defending, the full-back set up Ruben Dias’ opener, then doubled the advantage with a wonderful strike, before Riyad Mahrez and Raheem Sterling finished a 4-0 triumph that sends City four points clear of Liverpool, who face Tottenham later in the day.

Six Premier League matches were postponed over the weekend, but City has so far been unaffected by the increase in Covid cases across the league.

When Newcastle goalkeeper Martin Dubravka surrendered a cheap corner and then got mixed up with defender Ciaran Clark, Dias was able to nod in Cancelo’s hooked throw.

Cancelo doubled the lead after a clever turn away from Joe Willock in midfield, the Portuguese allowing himself too much room on the edge of the box and arrowing a strike into the top corner.

Newcastle could have equalized before the break, but a straightforward penalty was refused when a sliding Ederson brought down Ryan Fraser inside the area, with VAR opting not to intervene.

Midway through the second half, VAR was called into action when Mahrez’s volley from Oleksandr Zinchenko’s cross was first chalked for offside, only for replays to reveal that the Algerian had been played on.

The fourth goal came when Cancelo’s diagonal ball found Gabriel Jesus, who surged into the box before finding Sterling for a typical back-post tap-in.

Chelsea’s terrible form continued as they dropped further points, putting them six points behind Manchester City in the Premier League.

The Premier League turned down Chelsea’s request to postpone the match at Molineux due to the Covid-19 outbreak and injuries in the Blues’ camp.

Chelsea were without a recognised striker once again, with Christian Pulisic leading the attack.

With 12 minutes remaining, Pulisic had their best chance of the game, but was denied by keeper Jose Sa after being put through by Marcos Alonso.

Daniel Podence scored at the far post after Raul Jimenez was unable to meet Romaine Saiss’ cross from the left. Wolves thought they had taken the lead in the first half.

Here is how the EPL table looks like after the matches: 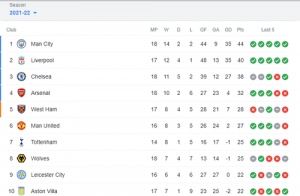