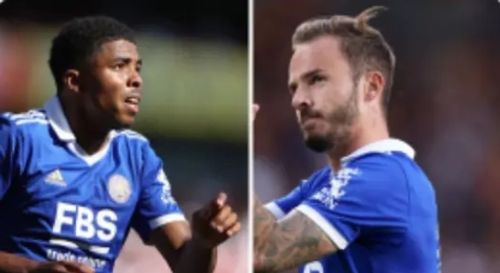 After failing to meet up Barcelona’s €30 million asking price for former Borussia Dortmund and Arsenal star striker Pierre Emerick-Aubameyang in their Thursday negotiations, Chelsea have as well been left in limbo after latest bid for one of their long-term linked star hits the wall. Despite having Cesar Azpiliqueta and Reece James as heart of his wing back, Chelsea’s Thomas Tuchel is not yet settled for his defence reinforcement especially after losing Antonio Rudiger, Andreas Christensen and Melang Sarr to Real Madrid and Barcelona respectively, but now it likely cost him more to find a super-sub solutions for James in this summer transfer, this is after Leicester city insisted that Wesley Fofana is not for sale.

According to sports specialist Fabrizio Romano, Leicester city head coach Brandon Rodgers has given red light to Chelsea that he is trying to find a contract extension deal for Maddison but Fofana is not for sale.

Giving out his statement at club’s official website as also reported by Romano the former Liverpool boss insisted:

“There are talks for Maddison new deal. I’m sure the club would want to extend James contract. Both sides have to able to find an agreement.”

“Fofana is not for sale, club have made that clear-unless anything changes on that I would expect him to be here”. Chelsea have been pushing hard for the 21 years old Frenchman, but it seems like the Foxes won’t accept anything less than € 100 million.