Nnamdi Kanu, the leader of the Indigenous People of Biafra, IPOB, has attacked Bola Tinubu, leader of the All Progressives Congress, APC, accusing him of being behind the killing of End SARS protesters.

The APC National Leader had in a recent statement denied sponsoring the ongoing nationwide protests by young people in Nigeria.

Nigerians have been protesting police brutality, killings and extortion for over one week all over the country, calling for a total reform.

In a Facebook post, Kanu lambasted the APC leader for saying that Nigerian youths can no longer be deceived. 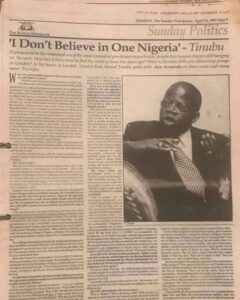 “Does Bola Ahmed Tinubu think that people are dumb? In order to deflect attention from his sponsorship of Mushin thugs attacking innocent protesters, they released this junk of a headline to confuse the gullible,” Kanu said.

“Tinubu, you cannot be the sponsor of End SARS because you are a corrupt beneficiary of a corrupt system our youths are fighting to dismantle.

“Such subterfuge or flipping of the narrative may have worked in Nigeria in the past, this generation are now sufficiently enlightened to see through these childish media games.

“This is generation 2020, they are smart, intelligent and savvy. Try your media tricks somewhere else.”