EPL: “I’ll love to lift trophy with the Blues this new season, if joined in 2022”- Eden Hazard 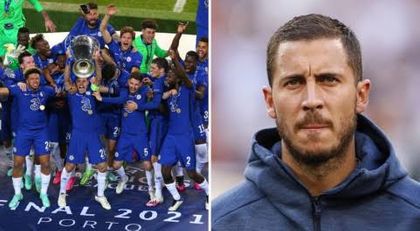 No doubt, In the UEFA Champions League, UCL, it is the most prestigious European trophy for club football to lifts, and it has always been the dream of every players to participate in this competition and their desire to lift the trophy in their various clubs, as Eden Hazard dream to lift trophies with the Blues this new campaign season 2021/2022.

They are several club legends who have retired from football but they failed to win the Champions League trophy in their entire career.

Spanish La Liga side Real Madrid are the most successful club in the history of the competition, having won the trophy a record 13 times, while Italian Serie A side AC Milan has won the trophy seven times, English side Liverpool and Bayern Munich of Germany have also won the trophy 6 times each.

Chelsea are the reigning European Champions, as they beat Manchester City 1-0 back in May to lift their second UEFA Champions League title in 9 years. The 2021/22 Champions League draws were held at the European football governing house at Nyon, Switzerland, as 16 teams are battle ready to determine which team could reach the last 8 of the competition.

The defending Champions are face with series of injuries in recent games, and could be one of the reason they are willing to sign top quality players in January. They have been link with several players ahead of the upcoming transfer window in January. The Blues are willing to bring back their former player to Stamford Bridge in January.

The Belgian international Eden Hazard is ‘open’ alongside Chelsea owner Roman Abramovich to make his return to West London a reality in the upcoming transfer window.

The Santiago Bernabeu chiefs are willing to let the Belgian leave Real Madrid this January transfer window. If Chelsea sign Eden Hazard in January, they will register the Belgian ahead of their Champions League clash against Lille.

If peradventure Chelsea bring back the Belgian talisman,he could make history by playing against Lille – the club Chelsea signed the Belgian from in 2011, the winger could be set for a reunions with both Chelsea and Lille in their UEFA Champions League clash in 2022.

Certainly, Chelsea take on Lille in the UEFA Champions League, UCL, on February 2022 in their first leg in the round of 16 clashes at Stamford Bridge stadium to boost their points in the UCL table fixture.