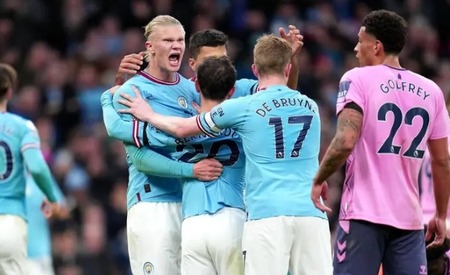 Manchester City failed endeavour to leapfrog Arsenal into first place in the Premier League table when they tackled the Everton at Etihad Stadium. They draw 1-1. There was a whistle at the Etihad too as Stones hits the post minutes before half-time and a pumped up Erling Haaland struts down the tunnel having given his side the lead.

Fulham 2-1 Southampton. An intriguing game at Craven Cottage, Fulham had the lead during first-half and Southampton had work to do. Ward-Prowse equalised during 56th minutes. Bournemouth 0-2 Crystal Palace. Two goals from two corners and they had complete control of this. Bournemouth had rarely threatened them at the other end.

Newcastle 0-0 Leeds. Luke Ayling was booked just before half-time as he triped Willock before the whistle was blown to signal the break.

How Epl table looks after today’s matches were played.