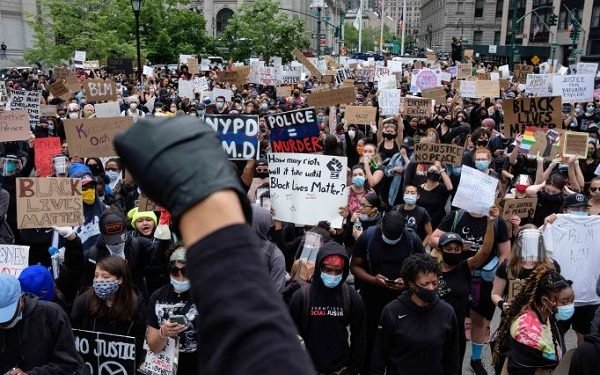 The United States of America President, Donald Trump has threatened to send in the military to quell growing civil unrest in the United States (U.S.) over the death of George Floyd in police custody.

He said if cities and states failed to control the protests and “defend their residents”, he would deploy the army and “quickly solve the problem for them”.

Protests over the death of George Floyd have escalated over the past week.

But presidential candidate Joe Biden criticized Trump yesterday for “serving the passions of his base”.

“We’re not going to allow any president to quiet our voice,” the Democrat said, referencing the U.S. Constitution, which guarantees protesters’ freedom to assemble.

Yesterday, the Las Vegas sheriff said an officer died in a shooting after police attempted to disperse a crowd.

Dozens of people have been injured as authorities used tear gas and force to disperse protests, which have swept more than 75 cities.

Four officers, meanwhile, were shot and injured on Monday night during unrest in St Louis, Missouri.

In Chicago, two people were reported killed amid unrest, although the circumstances are unclear.

The chief of police in Louisville, Kentucky has been sacked after law enforcement officers fired into a crowd on Sunday night, killing the owner of a nearby business.

Australian PM Scott Morrison has demanded an investigation into the alleged assault by police of two Australian journalists covering protests in Washington DC.

Music channels and celebrities have pledged to mark Blackout Tuesday, pausing for eight minutes – the length of time a police officer knelt on Floyd’s neck.

The protests began after a video showed Floyd, 46, being arrested in Minneapolis on 25 May and a white police officer continuing to kneel on his neck even after he pleaded that he could not breathe.

The officer, Derek Chauvin, has been charged with third-degree murder and will appear in court next week. Three other police officers have been fired.

The Floyd case has reignited deep-seated anger over police killings of black Americans and racism. It follows the high-profile cases of Michael Brown in Ferguson, Missouri; Eric Garner in New York; and others that have driven the Black Lives Matter movement.

For many, the outrage also reflects years of frustration over socio-economic inequality and discrimination, not least in Minneapolis itself.

The president delivered a brief address from the White House Rose Garden, amid the sound of a nearby protest being dispersed.

Trump said “all Americans were rightly sickened and revolted by the brutal death of George Floyd” but said his memory must not be “drowned out by an angry mob”.

Trump deepened outrage on Monday by posing at a church across from the White House clutching a Bible after law enforcement officers used teargas and rubber bullets to clear protesters.

The U.S. Secret Service, charged with protecting the president, yesterday closed down until further notice the streets around the White House, media reports said.

Demonstrators set fire to a strip mall in Los Angeles, looted stores in New York City, and clashed with police in St Louis, Missouri, where four officers were taken to hospital with non-life-threatening injuries.

An emotional St. Louis police commissioner, John Hayden, said about 200 protesters were looting and hurling fireworks and rocks at officers.

But US President Donald Trump’s signaling of religious affiliation has not been welcomed by a range of clerics as the nation struggles to manage the twin challenges of a pandemic and widespread political protest.

The Episcopal Bishop of Washington, the Right Reverend Mariann Budde, said: “The president just used a Bible, the most sacred text of the Judeo-Christian tradition, and one of the churches of my diocese, without permission, as a backdrop for a message antithetical to the teachings of Jesus.”

James Martin, a Jesuit priest, and consultant to the Vatican’s communications department tweeted: “Let me be clear. This is revolting. The Bible is not a prop. A church is not a photo op. Religion is not a political tool. God is not your plaything.”

Rabbi Jack Moline, president of the Interfaith Alliance, said: “Seeing President Trump standing in front of St John’s Episcopal Church while holding a Bible in response to calls for racial justice – right after using military force to clear peaceful protesters – is one of the most flagrant misuses of religion that I have ever seen.”

“The situation we are seeing today we have seen in different parts of the world before.

“Grievances must be heard, but they must be expressed in peaceful ways, and authorities must show restraint in responding to demonstrators,” he said.