Hakim Ziyech returns from his World Cup exploits, Reece James and Ben Chilwell are both physically fit after injury recoveries- how Chelsea might look when the Premier League resumes 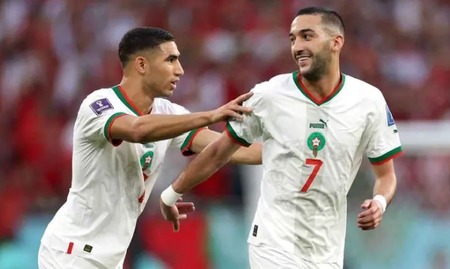 The World Cup exploits of Hakim Ziyech may have saved his Chelsea career. A change of scenery can do wonders for one’s state of mind. With only one Premier League appearance this season, Ziyech’s future at Stamford Bridge looked as bleak as the recent wintery conditions shrouding the capital a month ago.

Ziyech has made only a few appearances for Chelsea this season, according to manager Graham Potter.

The Moroccan was a regular under Thomas Tuchel last season, but a slump in form saw him start only three of Chelsea’s final ten league games.

Tuchel’s dismissal in September provided Ziyech with the opportunity to impress new boss Graham Potter and clear the slate, but his performance was disappointing.

With only 270 minutes of football under his belt this season, the former Ajax forward joined Morocco’s World Cup squad last month.

But with his Chelsea career visibly waning, Ziyech was handed the opportunity to put himself firmly in the shop window on the world’s biggest stage.

The 29-year-old accomplished this with a series of heroic performances for the Atlas Lions during their run to the semi-finals, where they were defeated by France.

Ziyech’s performances in Qatar have prompted speculation about whether he has put himself on the market for potential suitors or whether he has returned to the west London shelf. Ziyech was back on top form at the World Cup, starting all of Morocco’s games and repaying manager Walid Regragui’s faith in him.

It was also a timely reminder to Potter of what he has at his disposal ahead of the Premier League resumption, with Chelsea currently sitting in eighth place, eight points behind the top four.

His two goals and an assist in Qatar spoke volumes for a player who has struggled to persuade Potter that he can be relied on.

Ziyech, one of Chelsea’s World Cup forwards, will return to the UK with his head held high.

Meanwhile, Mason Mount came in and out of Gareth Southgate’s England squad, while Conor Gallagher did not play despite being named to the squad.

Graham Potter will be looking for Ziyech to translate his international form to club football.

Christian Pulisic, a Manchester United and Newcastle target, was arguably the standout player for the United States before they were eliminated in the Round of 16 by the Netherlands.

In the meantime, Kai Havertz and Germany were eliminated at the group stage.

Now that Ziyech has reclaimed the spotlight, Chelsea could do worse than capitalize on his improved form by reintroducing him into the starting lineup for the holiday fixtures.

Potter cannot afford to lose any more ground in the race for European places, and with such a short turnaround until the start of the season, the Chelsea manager may find a number of his stars suffering from World Cup hangovers.

Ziyech has yet to score in nine appearances for Chelsea this season. Ziyech’s Chelsea contract expires in two and a half years, and his time in west London has been a mixed bag since his arrival in 2020.

But there is still time for him to break his indifferent spell and shine for the struggling Blues as they try to turn their fortunes around.

A World Cup followed by a month-long transfer window could see interest rise in the forward, much like a number of his Moroccan teammates.

Hakim Ziyech will be leaving Stamford Bridge, which is why

But, with a Premier League season still to go and a Champions League clash with Borussia Dortmund in the spring, Ziyech could play a significant role for the Blues this season.

He may also be joined by the soon-to-return Reece James and Ben Chilwell, who are both recovering from injuries.