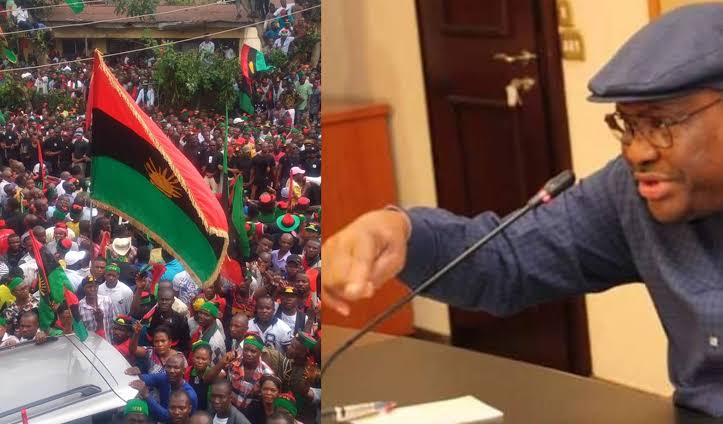 The residents of a residential area in Port Harcourt, Oyigbo otherwise known as Obigbo to some other Rivers state residents, in the last few days have been on hellish experience since the #EndSARs protest begins in Rivers State.

This problem all started during the endSARS protest where some northern traders had clashed with some alleged members of the outlawed IPOB and that triggered a series of mayhem that saw to the deaths of some Nigerian army personnel and the burning down of some police stations.

Gov Wike irked by the development had invited the military to undertake a restoration of law and order in the area but according to some residents, the army has allegedly turned out to be on a revenge mission as residents are reportedly hunted and killed in their homes.

There has been widespread condemnation of the action which many see as a direct command from the governor and many have called him to put an end to the killings.

In a video as seen on Twitter, the visibly angry governor can be seen daring any IPOB member to start trouble again, He wondered why IPOB would dream of hoisting their flag under his watch. He compared them to the Boko haram insurgents and said it was intolerable for them to hoist any flags under his watch.

The governor added that it was the highest form of sacrilege and vowed that he will never tolerate that kind of action under his watch.

He went ahead to mention that the position of governor has indeed, made him forget some things and that whatever the IPOB members think they have, he also has it.

He challenged them to try their worst on him.

The governor who before his election was known as ‘High Tension’ because of his dogged stance on some political issues is well feared in the state as he seems not to be afraid of anything and for a while, has been the number one critic of the SARS unit of the Nigerian police force before it was eventually scrapped.

As of the time of the report, the 24-hour curfew in the oyigbo area of port Harcourt is still very much in force.