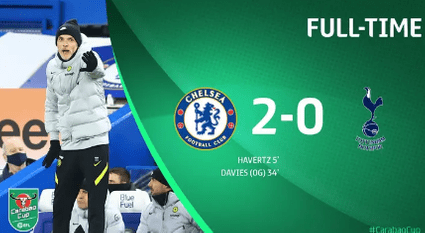 Chelsea are back to winning ways after defeating Tottenham Hotspurs by 2-0 in the first leg of the Carabao cup Semi finals on Wednesday night. The blues have not been convincing in their last 6 Premier League games after winning only 2 games in 6 fixtures.

The Blues dominated the game right from the beginning of the match to the end game despite more than 6 first team players out of the starting eleven.

Players like Ngolo Kante, Kovacic, Silva, Chalobah, Christensen and Timo Werner did not start the match. Kai Havertz and an own goal have Chelsea the perfect 2-0 victory on Wednesday night.

Chelsea have been outstanding in their last two games and let’s take a look at the difference between the Chelsea team with a disappointing performance16-20 EPL match and their last premier league match against Liverpool and Tottenham Hotspurs game.

In Chelsea and Tottenham Hotspurs game, no all Chelsea players were active throughout the 90 minutes. Chelsea have lost more than 5 points this season because some of the players were lazy to do their jobs.

Chelsea conceded more than 3 late goals that denied them victory in more than 3 games in their last 6 fixtures.

The Chelsea team that played their last two games were determined to win their games and gave the blues the edge against Tottenham Hotspurs.

Chelsea came from two goals down to draw Liverpool 2-2 in their last match and with their performance, it was clear that team were determined to win the match.