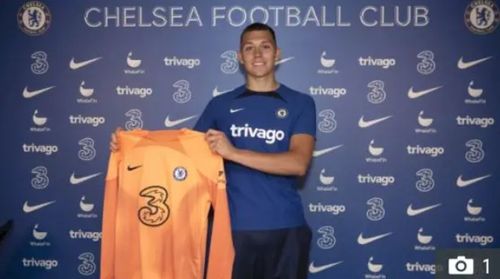 Chelsea are looking forward to making important signings this summer and Tuchel is happy to have already signed. Koulibaly from Napoli as well as Raheem Sterling from Manchester City. The German tactician is still looking to sign more high quality of players this summer and has been linked with Frenkie de Jong who is eyed as well by Manchester United from Barcelona. Next in line is the West London side has decided to make huge step into securing the future of the club. With young talented set of players being considered to join the club as well. And the Londoners have made a move to sign Chicago Fire ace as the young 18-year-old American goalkeeper Gabriel Slonina has signed a six-year deal with Chelsea. His expected to still as well stay with the MLS outfit on loan until January then he may now join the Premier League side as per Sunsport report. However Slonina has a big task ahead with Tuchel having their Senegalese international Mendy as number one goalkeeper.

As well as there is Kepa Arrizabalaga as cover. In a situation where the £72m goalkeeper, Kepa move out of Chelsea on loan this summer as Napoli are reported to eye his signature. Slonina will be happy to have more opportunities to challenge Mendy.