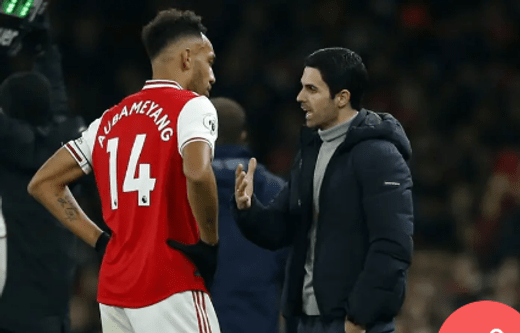 According to report, Arsenal’s coach, Mikel Arteta has threatened Arsenal board over the decision keeping Aubameyang in the club.

Arsenal manager, Mikel Arteta has said he will pack his bags and leave the club if he cannot demand respect and commitment from his players.

The Spaniard also insisted he is not being “dictatorial” in how he’s handling Pierre-Emerick Aubameyang’s saga.

Aubameyang was removed as captain of the Gunners earlier this month after his latest disciplinary breach.

Since then, the Gabon striker has sat out the last four fixtures against Southampton, West Ham United, Leeds United and Sunderland.

EPL: 2 Area Arsenal is better than Chelsea based on the current form

The 32-year-old will also continue to train apart from the first team before leaving for the Africa Cup of Nations next month.

Arsenal coach, MikelArteta has this to say,

“I don’t establish my authority by being dictatorial or trying to be ruthless.

“I just ask for one thing, it’s respect and commitment. That’s all.

“And if you don’t ask for that at this level, I think I will pack my bags and go somewhere else because that is the minimum you can ask for.

“I am sorry but I am going to expect that from everybody who works for the club. First of all, myself.

“And the day I don’t do that, I’ll walk through that door and go and do something else. It is as clear as that,” Arteta said.