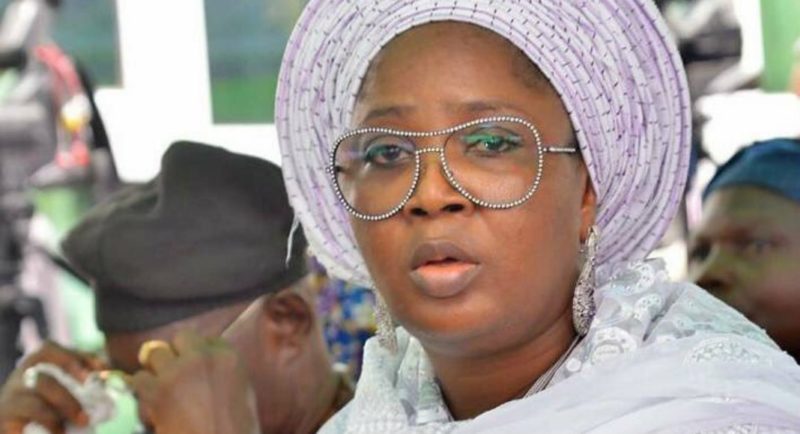 The National Leader of the All Progressive Congress(APC), Senator Asiwaju Bola Ahmed Tinubu’s daughter, Mrs. Folasade Tinubu-Ojo, is on the rampage as she shutdown computer village in Ikeja, Lagos.

Folasade Tinubu-Ojo who is also the Iyaloja General of Lagos has shut down Nigeria’s equivalent of the silicon valley, the Computer Village, which is the hub of ICT accessories in Nigeria.

She gave her aides the order, who invaded the village overnight removed signboards of the various associations domiciled in the village with the order that no shop should open for business.

That has been the case. Her order was carried out at a time, when many are just recovering from the lockdown, following the onset of the Coronavirus pandemic. At her behest, Nigerians who survive daily on income from the Computer Village have been locked out.

We gathered that her grievance was the refusal of about 5 million businessmen, some of the experts inhabiting the hub to pay the imposed levy of N1000 per day, irrespective of about 15 existing associations, all registered by the Federal Government, in what many have described as a political move to keep the area under control.

When our correspondent visited the area, all the shops were under lock and key, no business was ongoing with the situation very tense at the moment. Sources informed us that the situation will likely persist in the coming days.

Some shop owners who spoke said they will never submit to her authority. They wonder how Folasade Tinubu- Ojo will want to wield her influence in a hub where she has no shop. They told us that leadership in the market is based on the democratic election and challenged her to put up a candidate when elections are due.

We also gathered that the hub had already succumbed to a Baba Oloja who also owned no shop in the area but that this time, it will fight to finish. Sources informed us that the relevant association may go to court to stop this impunity by the Iyaloja General of Lagos.

Last year, members of the Computer Village protested her decision to impose Iyaloja on them. Folashade Tinubu-Ojo who addressed the issue said the protesters were ill-informed.

“According to our constitution, I can choose anybody from any local government in the state to head the market, all the Iyaloja and Babaloja in all the Lagos markets are my representatives in the market where they operate.

“Kindly educate them that phones, handsets, computers are commodities. They cannot tell us they are not pepper sellers, everybody cannot be textile dealers; they can’t tell us that the computer village will be exonerated from other markets. We have the right to choose for them Iyaloja and Babaloja.

“Those people protesting never approached me to complain. They don’t have the initiative that the person leading the protest has finished his tenure and wants to remain in power…

“Computer village is not just an ICT hub, there are a lot of commodities being sold there; nobody can say it is wrong to select a babaloja and iyaloja for the market. Those that have been selected were not selected because they are Yoruba, in some of our markets in Lagos we have Igbos that were selected as market leaders,” Tinubu-Ojo said.