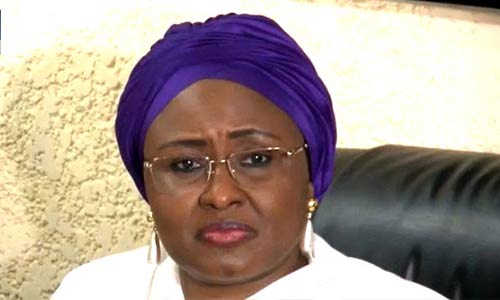 The Villa was thrown into confusion, Thursday night, when the First Lady accompanied by her children – Zahra, Halima, and Yusuf, – took a team of policemen led by her Aide-De-Camp to forcefully confront Tunde following an earlier heated disagreement over his refusal to self-isolate after his trip to Lagos to see his wife, who had just given birth to a boy.

Sources familiar with the event said on reaching the House 8 Guest Chalet of the President, where Tunde resides with his family, there was an altercation between him and Mrs. Buhari, her children, and her security aides that eventually snowballed into a near-fatal brawl.

Our sources said Tunde, who appeared helpless and clearly outnumbered had to flee on foot.

“This was when Mrs. Buhari’s ADC and four members of her police escort fired some shots into the air as they pursued him. He had been seriously wounded at this time but successfully made it to the residence of Mamman Daura where he would shelter for the night,” a source in the Presidential villa told THEWILL.
The source said the Inspector-General of Police, Mr. Mohammed Adamu, following a briefing on the horrific incident arrived the Presidential Villa Friday morning and ordered Mrs. Buhari’s ADC and all the police personnel attached to her who took part in the altercation and shooting arrested and detained.

Narrating the ugly incident to THEWILL, the source at the Villa, who asked to remain anonymous, said: “Let me explain what is really going on so that your journal and your readers can truly understand what is happening in the Villa now, the dynamics and 2023 presidential politics.

“Since Mallam Abba Kyari died, the First Lady has been trying to kick the President’s Personal Assistant who is also his nephew, Tunde (The president named him Tunde in honor of the late Tunde Idiagbon, his former deputy when he was military head of state) out of the Villa so that she can effectively wield full influence over him (The President).

“She believes Tunde and the President’s other relatives are blocking her from having full control of her husband and power in the Villa. But it is obvious that the President does not want this because he has encouraged Tunde to continue with his job.

“Tunde’s wife just delivered a boy in Lagos. So, he got the President’s approval to fly to Lagos to see her with his two sisters last weekend. He returned to Abuja last Sunday and returned to work on Monday. He was however asked to self-isolate for 14-days because of the coronavirus pandemic by the Chief Personal Security Officer to the President, Abdulkarim Dauda, and the President’s Aide-De-Camp, Mohammed Abubakar, but he told them that the President said he shouldn’t.

“On Thursday, when the First Lady heard that he was still coming to work, she asked him to self-isolate but he told her that the President said he didn’t have to. Her insistence led to a heated verbal exchange between them and the President was later informed about this.

“What happened on Thursday night is a big embarrassment. The First Lady and three of her children–Zahra, Halima, and Yusuf–took some policemen attached to her, including her ADC to Tunde’s house. They didn’t like the way Tunde spoke to their mother, so they actually went there to fight him. During their confrontation with him, he was overpowered and clearly could not withstand their number, so he ran for his dear life.

“It was as he was running and they were chasing him that they shot a few times into the air. They chased him to the house of his uncle, Mamman Daura. Of course, they couldn’t enter Mamman’s residence to get Tunde but they shouted and made a lot of threats before they eventually left.

“Do you know that Yusuf later went back to Tunde’s house in the wee hours of the morning with a gas tank to burn it down? Thank God Tunde wasn’t home when he got there. That was what saved his life.

“This would send a wrong and scary signal. You can be shot at or brutally attacked in the Presidential Villa at the First Lady’s orders if you do go against her. This is not how it should be!

“You see, Nasir El-Rufai and Lamido Sanusi are the ones using the First Lady to heat up things in the villa since Abba Kyari died because of their interest in the 2023 presidential election. This is what is escalating this whole new fight for full access to the president.

She already has the Chief of Staff on her side so she doesn’t want Tunde giving the President contrary views and advice. She wants everyone against her out of the villa but that is not going to happen.” – SAN FRANCISCO, June 12.