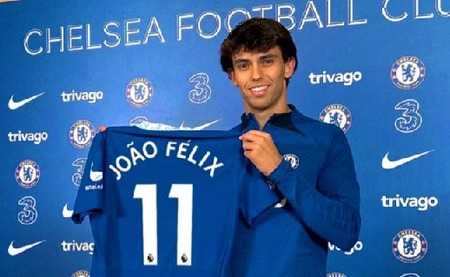 After Chelsea confirmed his £9 million loan move on Wednesday, Joao Felix revealed two reasons for leaving Atletico Madrid for Chelsea. The Portuguese forward will remain at Stamford Bridge until the end of the season after extending his contract with Atletico Madrid until 2027.

Felix was heavily linked with a move away from the Rojiblancos earlier this month after his relationship with manager Diego Simeone soured.

Despite links with Arsenal and Manchester United, Chelsea swooped in for the 23-year-old and agreed to meet Atleti’s lofty demands.

Felix explained that he agreed to swap Madrid for west London for the first time after completing his January transfer because Chelsea is one of the best clubs in the world.

He also expressed his excitement at returning to Stamford Bridge after previously visiting the famous stadium with Atleti.

He stated: “Chelsea is one of the best teams in the world, and I hope to contribute to the team’s success. So I’m overjoyed to be here and even more excited to play at Stamford Bridge.”

The signing of Felix to a contract extension to return to the La Liga giants next season could bolster reports that Simeone is set to leave this summer.

However, it has raised questions about why Chelsea approved such an expensive loan if Felix is unlikely to stay beyond June, with the deal costing around £1.5 million per month.

Graham Potter has been eager to add to the expensive squad he inherited from Thomas Tuchel earlier this season in order to avoid a disastrous first season in charge.

Blues owner Todd Boehly’s new recruitment team includes Christopher Vivell and Paul Winstanley, who were both photographed with Felix after his official arrival.

Felix is Potter’s fourth signing of the winter transfer window, but only the second who will be expected to make an immediate impact in the senior squad.

He joins Benoit Badiashile, who joined for £35 million from AS Monaco, and teenage duo Andrey Santos and David Datro Fofana.

Chelsea released a video message from Felix to the club’s supporters shortly after announcing his arrival.

Good News To Chelsea Ahead Of Tomorrow’s Game

Chelsea message from Felix to the club’s supporters shortly after announcing his arrival, ahead of his debut, which could come as early as Sunday, when Crystal Palace visits in the Premier League.

“Hello, Chelsea supporters! I’m thrilled to be here at this club, and I hope to see you at Stamford Bridge soon.”