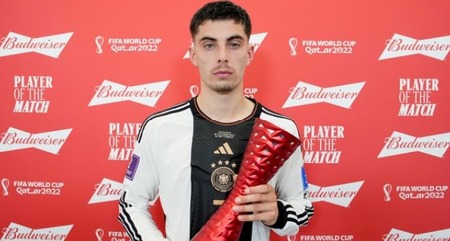 Germany’s Kai Havertz has demanded that they ‘look at themselves’ after exiting the World Cup at the group stage for the second time in a row.

Following a dramatic final night in Group E, the 2014 champions fell at the first hurdle, just as they did in Russia four years ago. Although Germany came from behind to defeat Costa Rica 4-2 in a thrilling match, Japan’s heroic 2-1 victory over Spain saw the latter pair advance to the round of 16.

Havertz, a Chelsea midfielder, scored two crucial goals to give Germany all three points on Thursday, but it wasn’t enough for Hansi Flick’s team to overcome a shock loss to Japan in their first game and a draw with Spain on Sunday.

The 23-year-old forward, who came on as a substitute for Germany in their final match at the Al Bayt Stadium, was named Player of the Match for his impactful performance, which required him to attend post-game media duties before flying home from Qatar.

We must examine ourselves.

“We then successfully turned the game around. But then you see the opposite outcome. We can’t afford to lose to Japan at this level of quality. The game against Japan was decisive.”

The former Bayer Leverkusen starlet was then asked if Germany’s off-field activities had distracted the camp during the contentious tournament, as the country was one of the only ones to stage any kind of protest. Prior to their 2-1 loss to Japan, Havertz and his teammates covered their mouths for a team photo, implying that they were being restrained by FIFA from discussing Qatar’s atrocious human rights record and restrictive social laws, such as homosexuality being criminalized.

In a tournament like this, on-field performance takes precedence “Chelsea ace, who joined the Blues for £75.8 million in 2020, confirmed. “Of course, we were thinking about the top. We repeatedly stated our position. That, however, is the last thing we want to use as an excuse.”

When giving his post-match assessment, manager Flick echoed Havertz’s sentiment. “I’m not dumbfounded. In the first half, I was already disappointed and irritated with the team “The former Bayern Munich manager admitted as much before emphasizing his commitment to see out his contract until after the 2024 European Championships, which Germany will host.

By making mistakes and being careless, we invited the opponent into the game. Nonetheless, we were successful. Not today, but 20 minutes ago, we were defeated by Japan. We could have easily defeated Spain.

Forget Sterling and Havertz, see Chelsea player who is unstoppable in the EPL defenders

“In any case, the disappointment is enormous. I don’t believe the team was disinterested. We created numerous chances in the first half and attempted to improve in the second. We have, however, contributed significantly to the fact that we are now returning home. My dissatisfaction, as well as that of my coaching staff, is palpable.”