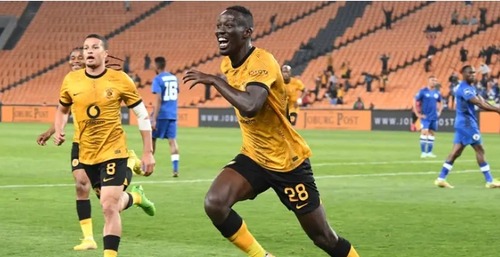 Bonfils-Caleb Bimenyimana, Kaizer Chiefs striker, started well this season, as him the past weekend seeking a heroics after fantastic goals scored this season in the South Africa Premier League, PSL, rating-player, top goalscorer.

The Chiefs striker, who is currently 24-year-old striker, he is one of the best in the league, as his talk in the football world being discussed in the country after he single-handedly guided Amakhosi to a well-deserved 3-1 victory over Stellenbosch FC at the DHL Stadium on Sunday afternoon.

Meanwhile, what make Chiefs striker, stand out, because Bimenyimana has converted three penalties to create PSL history and become the first-ever player to achieve that feat, which saw him top the PSL top goalscoring charts alongside Mamelodi Sundowns talisman Peter Shalulile with six goals.

According to his Burundian national team coach Jimmy Ndayizeye, the “Black Panther”, as Bimenyimana is affectionately known owing to his iconic celebration, is capable of walking away with the Lesley Manyathela Golden Boot award at the end of the 2022/23 DStv Premiership campaign.

“I think he will definitely end the season as the league’s top scorer because his team is appreciating what he is adding,” said Ndayizeye as per KickOff.

“Remember, the guy is still new at the club and will get even better when he gets familiar with his teammates. He is going to get better as his fitness improves because he still needs to get into a space of playing 90 minutes regularly. For now, he hasn’t been able to play 90 minutes in a row so imagine what will happen when he eventually comes right in that space.

“Scoring goals has never been a problem for him because even here in Burundi he was the second top scorer and then became a top scorer in Rwanda. I have always known that Caleb has the mentality to succeed anywhere he plays and he just needs support.

Although, their next match Chiefs will welcome Chippa United to the FNB Stadium on Saturday afternoon, October 15, 2022 at 14:30 hrs BST.