Kuwait Probes Drone That ‘Intruded’ On Day Of Saudi Strike 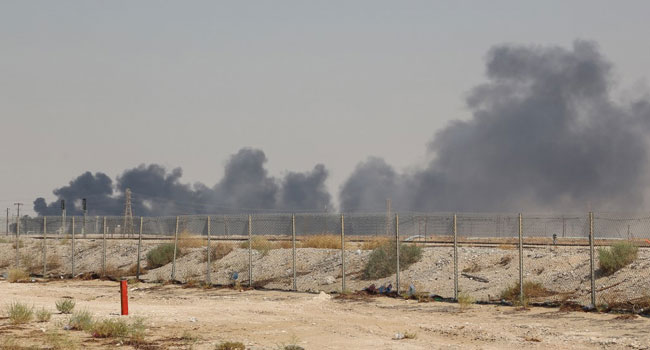 Kuwait is investigating accounts that a drone intruded its airspace and flew over the royal palace Saturday, the same day a devastating strike was launched on Saudi oil infrastructure.

Yemen’s Huthi rebels — who are aligned with Tehran — claimed the attack on two oil facilities which cut Saudi production by half, but the United States has blamed Iran and there is also speculation the assault may have been launched from Iraq.

Baghdad on Sunday denied any link to attacks on Saudi oil plants, saying it is “constitutionally committed to preventing any use of its soil to attack its neighbors”.

But Iraq is home to several Iran-backed militias and paramilitary factions, putting it in an awkward situation amid rising tensions between its two main sponsors, Tehran and Washington.

Media reports speculated that a drone traveling south from Iraq to the eastern oilfields of Saudi Arabia could have traveled over the sea or through Kuwait’s airspace.

Kuwait’s Alrai newspaper said that at dawn on Saturday, an unmanned drone about the size of a small car came down to a height of about 250 meters over the palace, before turning on its lights and flying away.

Kuwait’s Prime Minister Sheikh Jaber Mubarak Al-Sabah has ordered the beefing up of security measures around vital installations in the country, according to a government statement posted on Twitter on Sunday.

“Security officials have started the necessary investigation regarding the drone that was seen flying over the coastal area of Kuwait City,” it said.

Another newspaper, Al-Rai, said that the drone continued for a considerable period of time and flew over the seaside residential palace of Emir Sheikh Sabah al-Ahmad Al-Sabah who is undertaking medical tests in the United States.