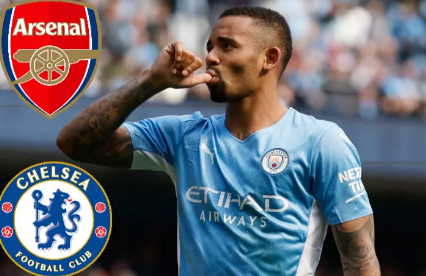 Gabriel Jesus is about to leave Man City this summer. But the Citizens aren’t going to let him leave for a cheap price. Arsenal have reportedly offered £30 million (€35m) for Jesus. Man City aren’t considering that offer as they have now named their transfer fee. They don’t want anything less than €50 million (£42m) for the striker. Apart from Arsenal, Chelsea are also interested in signing the Brazilian. (Ekrem Konur) Arsenal have completed their second signing of this transfer window. The Gunners have sealed a deal to sign Fabio Viera from Porto. Viera’s interest in playing in the Premier League played a huge part in the materialisation of the deal. The transfer fee for the midfielder was €50 million, but Porto have already accepted Arsenal’s offer of €35 million plus add-ons. (Fabrizio Romano)

“De Jong to Man United will eventually get done” – Ornstein Man United have been relentless in their pursuit of Frenkie de Jong. Erik ten Hag wants to build his team around the midfielder, but the deal is taking so long to complete. David Ornstein has now given a hint about the transfer. He believes that Ten Hag will eventually sign De Jong, although both Man United and Barcelona are making it something of a poker game. (David Ornstein, The Athletic Podcast, Utd District)

Gavi is close to renewing his contract Barcelona and Pablo Gavi’s agent met today to reach an agreement on the player’s contract. The meeting ended up being positive as both parties are now finally close due to Barcelona increasing their offer for the youngster. Gavi will soon renew his contract after the positive outcome of the meeting. He will have a €1 billion release clause. (Fabrizio Romano)

Real Madrid want Gnabry to replace Asensio
Marco Asensio has been persistently linked with a move away from Real Madrid this summer. If he leaves, Los Blancos have already identified his replacement. This replacement is Bayern Munich’s Serge Gnabry. Real Madrid have been monitoring the situation of Gnabry for a while and could try to sign him if they lose Asensio. (Ekrem Konur) Chelsea are interested in signing Barcelona youngster Alejandro Balde. The Blues have already contacted the defender’s entourage to let them know about their interest in him. Chelsea also informed Barcelona about Balde during their negotiations, which involved Marcos Alonso. (Ferran Martinez, Mundo Deportivo)