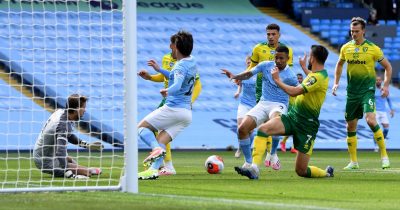 The UEFA Champions League, UCL, as PSG were trailing Manchester City to second spot in Group A hoping to get all three points to overtake City. Manchester City on the other hand, having been defeated by PSG in the first leg of their meeting wouldn’t want to be defeated the second time. What an intensive battle.

The first 6minutes of the game saw a City side aggressively surging forward in search of an early goal, but PSG were able to prevent from doing so.

Moving on to the game, the battle became very intense as both teams tried to score whenever they are in possession. City and PSG were evenly match as the game ended 0-0 at half time.

The second half began, with City in their usual way pushing forward to getting a goal. PSG held on to their own in order to prevent from not scoring, as they surged forward too in search of goal.

The goal came in, in the 50th minute when Kylian Mbappe scored for the visitors to make the score line 1-0 in favour of PSG.

Manchester City looking wounded by the goal, surged forward aggressively in order to get an equalizer. The equalizer came in the 63rd minute when Rahim Sterling scored for City to make it 1-1.

Arsenal, Barcelona, and others show interest in Raheem Sterling as Man City named their price in January

Another game came in, with City taking the lead when Gabriel Jesus who was brought in to replace Zinchenco scored in the 77th minute to put City ahead, making the score 2-1.

PSG tried on their own to get back to the game, but that did not happen as they ran out of time. The game ended 2-1 at full time in favour of Manchester City. Meaning, Manchester City have secured the top spot.

What a show! Both teams could have won, but it was City who were more clinical to getting an all important victory.