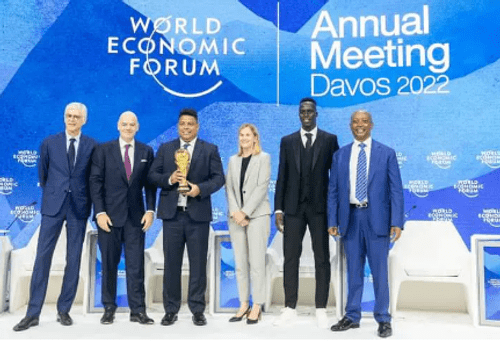 Senegalese and Chelsea goalkeeper Edouard Mendy recently posted on his official Facebook page about his attendance at the World Economic Forum in Davos, Switzerland.

According to the Chelsea star, he thanked FIFA President Gianni Infantino and Highness Tamim Al Thani for seeing fit to invite him to such a big event. Over 2,000 leaders and experts from around the world attended the meeting, all committed to the “Davos Spirit” of improving the state of the world. “I would like to thank His Highness Tamim Al Thani and the FIFA President Gianni Infantino for inviting me to the World Economic Forum in Davos. He also stated that the conference was a great opportunity to share and discuss the impact of football with great names such as Patrice Motsepe, Gianni Infantino, Ronaldo Nazário, Jill Ellis, Hassan Al Thawadi, and Arsène Wenger.