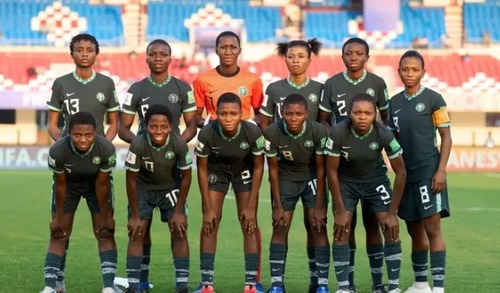 In the semi-final of the ongoing FIFA U-17 women’s World Cup in India, Nigeria’s Flamingos will play Colombia.

After Colombia’s 3-0 quarterfinal victory over Tanzania on Saturday, the pairing was decided.

On Wednesday, October 26, the Flamingos and Colombia will square off in the semi-finals.

After defeating the USA 4-3 on penalties on Friday, the Nigerian girls advanced to their first-ever U-17 World Cup semi-final.

After 90 minutes of football ended in a tie score, the game was forced into a penalty shootout.

Germany, which defeated Brazil 2-0 on Friday, is also in the semi-finals.

By winning, Bankole Olowookere’s team will be able to expand their legacy. After six tries, the Flamingos have finally made it to the semifinals. In 2010, 2012, and 2014, they made appearances in three quarterfinals.

The match between Nigeria and Columbia will start at 1 PM Nigerian time on Wednesday.