Most Bayern Munich fans in Nigeria, have taken to social media to congratulate their club side over 1-0 defeat on Paris Saint-Germain in the Champions League final on Sunday, August 23.

A 59th-minute header from former PSG man Kingsley Coman proved enough for the Bundesliga giants as Thomas Tuchel’s side were unable to claim their first Champions League crown.

Having finally ended their quarter-final curse in the competition, the Parisians were unable to find a way past Manuel Neuer with both Mbappe and Neymar denied by Bayern’s veteran shot-stopper. 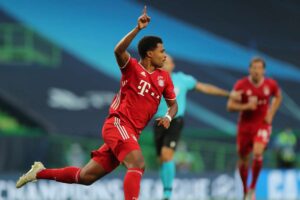 PSG’s star Brazilian was brought to the club from Barcelona with one eye on Champions League success but is adamant his side gave it they’re all in Lisbon.

“Losing is part of the sport, we try everything, we fight until the end,” Neymar posted on Twitter. “Thanks for the support and affection of everyone. Congratulations Bayern.”

Mbappe, meanwhile, was unable to add to his impressive trophy collection with the 21-year-old already boasting a World Cup and four Ligue 1 titles.

Much like Neymar, the Frenchman was quick to accept the result and congratulate his German opponents on their success.

“Disappointed not to end this year with the best of awards, but life is made that way,” Mbappe posted on Twitter.

“We fought with all our might. Congratulations to Bayern. And a big thank you for your support.”

Brazilian defender Marquinhos was disappointed to see PSG come up short in the decider but was still proud of how far his side managed to go in the competition.

“A final is not to be played, it is to be won. On the other hand, we’re all proud of our team. We must be proud to have reached the final. We have to keep going in this way,” he told RMC Sports.

“Now it’s time to get back to our habits in Paris, to think about the next season.”