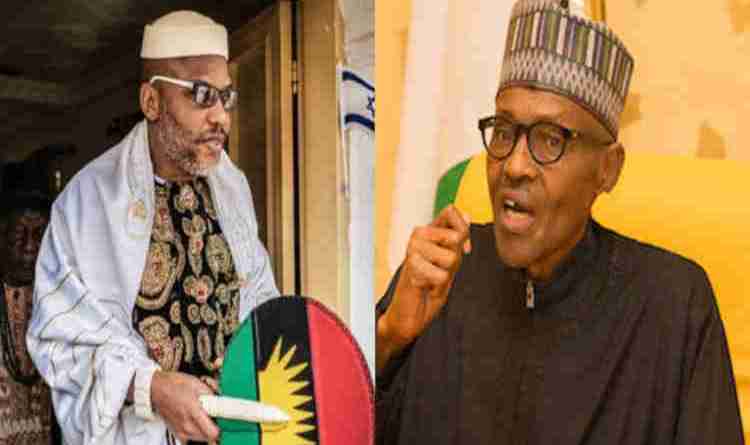 The leader of Indigenous People of Biafra (IPOB), Nnamdi Kanu, has berated Olusegun Obasanjo and Bola Tinubu for aiding the emergence of Muhammadu Buhari as Nigeria’s President. 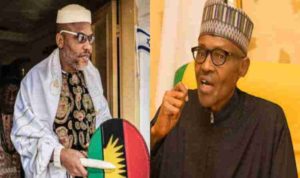 Obasanjo is a former President of Nigeria while Tinubu is the current National leader of the All Progressives Congress (APC), Nigeria’s ruling party on the platform Buhari contested the Presidency in  2015 and 2019.

The IPOB leader berated Obasanjo and Tinubu for helping Buhari into the office while quoting the headline: “Tinubu Was Right For Calling Buhari A Tribalist, Religious Fanatic, Says Obasanjo” in a post on the micro-blogging site, Twitter on Friday, August 21.

Read Also: If you kill us, we will kill you- Nnamdi Kanu reacts over Enugu killings

This online news recalls that former President Obasanjo had said last year January that Tinubu, a former Governor of Lagos state, was right to call President Buhari an ethnic bigot and religious fanatic in 2007.

Tinubu had while campaigning for Atiku Abubakar, the then-candidate of the Action Congress, in 2007, described Buhari of the All Nigeria Peoples Party as an ethnic bigot. Like Tinubu, Lai Mohammed, who is now the Minister of Information under Buhari’s administration, was part of Atiku’s campaign team at the time and had lampooned Buhari for saying the late military dictator, General Sani Abacha, did not steal.

In a statement on Sunday, January 21, former Obasanjo made reference to Tinubu’s scathing attack on Buhari, saying: “Bola Tinubu’s statement about Muhammadu Buhari in 2003 (2007) is fairly prophetic, ‘Muhammadu Buhari is an agent of destabilisation, ethnic bigot and religious fanatic who, if given the chance, would ensure the disintegration of the country. His ethnocentrism would jeopardise Nigeria’s national unity.”

Reacting to Tinubu’s attack on Buhari and Obasanjo’s affirmation in a tweet on the micro-blogging site, Twitter, Kanu wondered why Obasanjo and Tinubu “twice led the South West into an electoral alliance” with Buhari whom he  described as a “notorious Islamic extremist.”

The IPOB leader tweeted: “As Obasanjo affirms Tinubu’s description of @MBuhari as an “Islamic fanatic”, one wonders why these people twice led the SW into an electoral alliance with a notorious #Islamic extremist.